October 22, 2015
So there's this deli/wine bar/bistro in my neighborhood, called Tzuk Farm, named after the organic farm where much of the produce comes from, especially the cattle-based products, which are especially savory and spoiling.

I joined three wine buddies for an informal tasting. Here's one of the crowd, and doesn't he look happy? 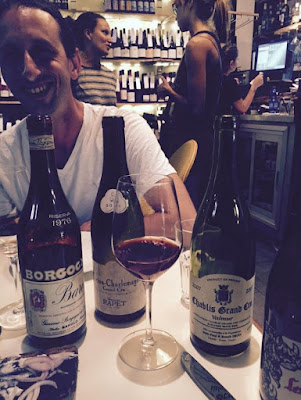 This is typical Chablis, even typical Chablis Grand Cru (marine aromas, breadth and depth on the palate), but actually backwards at first compared to the last bottle. Although it develops nicely and pungently, I prefer it at home when we can devote full attention to each other.

Judging by the color (which was the same as, well, a bourgogne), we thought it was unraveling, but this is actually decently robust, even tannic, if on the mellow side, with iron fillings and spices. It dies after an hour but who needs more - it's the kind of wine made by people who only wanted to make good good wines that aged well, just like their parents made them, a love letter from another age.

You have to know Charlemagne to be able to recognize the quality in this clench-fisted, tight-assed, virgin-pussied wine. But it's there, in that compact frame with its honeyed accouterments.