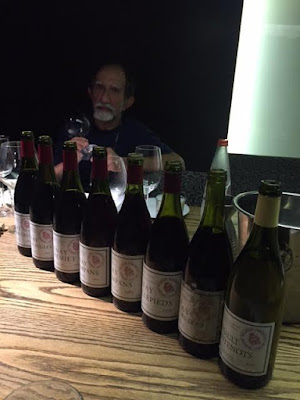 Daniel Lifshitz' tasting always manage to inspire me to horrible puns, which is at odds with the beautiful Bourgognes he selects for the portfolio he shares with Eldad Levy.

Case in point: the great, infinitely refined Domaine Marquis d'Angerville, a domaine that seems to live and thrive in idyllic Burgundian paradise.

But first, because Daniel's erstwhile partner in crime does bring his own dowry, we must start with a Champagne.

A wide, deep wine, full and ripe, yet with green apple acidity, just starting  to show its complex colors and display of minerals and mushrooms. Fantastic. 449 NIS.

Not all of the following wines are for sale, only the younger wines, which had been opened the previous evening, by the way.

A blend of the Pitures Dessus and Mitans vineyards. It's very closed, I get just primal red fruit and maybe a hint of flowers at first. There's a tannic backbone, yet despite that there's a silky delicacy to this.  460 NIS.

This is 2011, so it's not just a year older, it's a much more forward and drinkable vintage to begin with, so this is obviously a more expressive wine, moreso with time in glass, showing flowers and even garrigue. There's a firm backbone again, promising cellaring potential yet its quite silky for all that. 500 NIS.

This is more floral than the 2012 Premier Cru blend, and more expressive as well. It's as though the there's a greater depth of material that shines through. A gorgeous wine yet a firm one in the Volnay context. 490 NIS.

Definitely a mature wine, all about mushrooms and forest floor, with a really savory finish that only fine material, well aged, can provide. Having said that, as much as I enjoyed it, the overall response around the table, including mine, wasn't the wow you'd expect people drinking a 30 year old wine to have and anyway, the next wine knocked it out.

There's always a kind of hush when you realize you've reached the wine of the night. This is the real deal, as crystalline as a red wine can be, expressive, fresh, complete. There's that floral Volnay character again, that complements the iron filings with pulsating silkiness.

It's too easy to slip into anthropomorphism with Bourgognes, especially with a village that is the epitome of feminine Burgundy. I'm not going to try and avoid that misdemeanor. If the Taillpieds was the typical marquise, this is, if not masculine, then surely not a little butch. It's dense, ripe, chewy, with almost black fruit and such a deep stratum of minerals, you can just sense the vine roots digging into the hill.

This is certainly not what the public views as the mainstream version of Meursault, that is nutty, fat and wide. Rather, there's cool fruit, a cross of apples and oranges, with minty chalk. The nose is better than the palate right now, even though there's a nice balance of acidity and sweet fruit. 570 NIS.
Marquis d'Angerville Vilmart