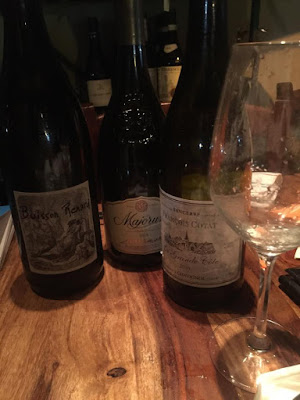 Warm wines and no women.

We had a logistics issue. We love Brut, for the food and atmosphere, but it's very small, see, and the small private room isn't that well aired and cooled. And August 2015 was very, very hot. So we tried to cram six bottles into three small ice buckets.We tried.

And Irit Kozak didn't come. That's the "no women" bit.

Other than that, a fantastic evening, great company and an eclectic (in Israeli terms) collection of Loire whites.

This was a whim buy for me. This wine comes from an old, rediscovered hill in Saumur (although the more famous version is made by Clos Rougeard). This has an interesting nose: apricots, herbs, river bed, with slightly oxidized notes reminiscent of apple cider. Very good acidity, but the oxidized notes and the sweetish finish are off-putting and I'm not sure whether we caught it a bad time or if this is the style of the wine.

One version of the Pouilly-Fume story has it that Didier Dagueneau put it on the map. I don't think the town needed him to put it on the map, but he's certainly priced as though he did. Well, he used to price his wines very dearly. He's dead. But his family carries on that particular tradition. To be fair, Didier and his heirs were and are quite meticulous and the wines age very well. For example, this ten year old Sauvingon Blanc, which is dry and herbal on the nose, more tropical on the palate, with depth and complexity that unfolds. It didn't wow me, but I've noticed I tend to like my Dagueneaus on the young side  -they're complex enough when young with a thrilling tension that I prefer.

One reason Pouilly-Fume didn't need Dagueneau to put it on the map is producers like Redde. This is the flagship wine and there is so much fossil-like aromas and flavors that it's like sucking on Atlantis. I like Redde anyway but this is amazing, awesome in its depth and potential complexity.

This is a more humble estate, also carried by Giaconda, and I'd like to explore it more, properly cooled down! It's funky and marine, the fruit yellow and ripe, but not over-done. There's an initial lack of focus, but it improves as it opens and grows colder.

This smells and tastes like a Sauternes (I understand it's intentionally picked with botrytis) but it's leaner, more focused, with a mineral edge. I was told it matures into an amazing, dry wine, but I like it now, too, even though I'm sure quite a few won't know what to make of it.