September 17, 2015
Few marriages are all smooth sailing, and ours is no exception. Let's face it, I'm not exactly prime time programming. But we made it through the first twenty years, and before we embark on the next, better decades, I got to do what every wine geek lives for: open anniversary wines.

But, before that, we indulged in a gift.

I've always said GHW's top sparkling wines are their best wines, and this is no exception.  Quite honestly, this is almost as good as the prototype, from that backwater of France, Champagne. Its only drawback is, perhaps, that the only pink thing about it is its color. Blind, I'd have called a blanc de noirs. It's all about mushrooms and toast, maybe a hint of strawberries as well. 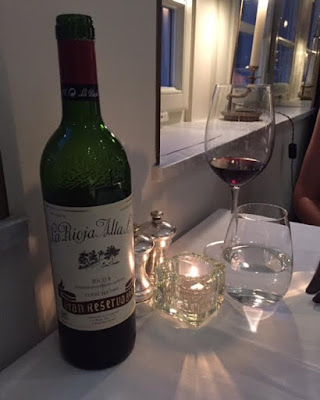 Rioja is perhaps the classic Spanish wine (all you Vega Sicila lovers can sit down now, I've noted your objections, but seriously, how many can afford to drink it, and how often?) and the "890' is one of the benchmarks. Supposedly. The 1989 was a delight, but then again, I was new at this game when I had it, but other than that, I've always preferred the Ygay (which is why that bottle of 1995 will wait for the 30th anniversary). This has very fine composure, with the same elegant breed that mature Bordeaux from the same period can have, smooth and silky with mellow red and black fruit, balsam,black pepper, celery - lacking in length, for me, though. 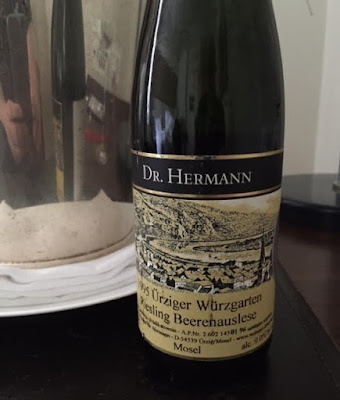 I brought a dessert, too. This is a typical example of how the sugar in these mature, sweet Rieslings is integrated with the acidity after a couple of decades. The vibrancy of youth is gone, and you get a deep wine, with obvious botrytis, apple cider, mint tea. I do feel, however, that too much liveliness of fruit is gone, by now.