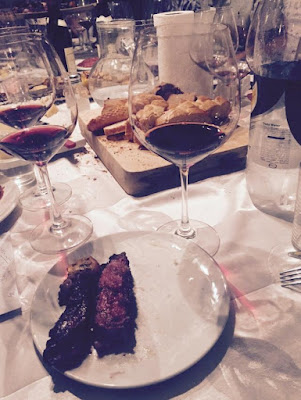 The latest installment in Daniel Lifshitz and Eldad Levy's on-going tastings, rambling through the Bourgogne Crown's portfolio producer by producer, brings us to venerable Christian Serafin, a perfectionist Gevrey producer who's been growing vines and crafting wines for over half a century.

While all the wines we tasted were obviously crafted by the same meticulous hand, always true to the classic French wine aesthetic (which is my shorthand for nuanced, balanced and elegant), there were obvious vintage and vineyard variations.

There is high quality juice in here, beyond that of a mere Bourgogne, because this is a declassified Gevrey, and what it gives most of all is that tingling sensation that says minerals to me. What it lacks in weight it makes up in finesse and pleasure. 225 NIS.

The 'real' Gevrey is made of slightly older vines and there is more weight, grip and depth now. The fruit in both cases is pure and balanced well with the acidity and tannins. It hints at the classic Gevrey sauvage, which I think has a great deal to do with minerals anyway, with a perfumed, yet reserved, touch of flowers. 345 NIS,

Very expressive and teasing aromas of flowers with a touch of meat, which carries to the palate, with its deep red fruit and saline finish. Already complex yet promises more to come, despite the reputation of 2007 for being early drinking. 790 NIS.

I think the Cazetiers could challenge many a Grand Cru for finesse and mystery, but this Charmes has greater power and obvious expression and presence, with an intensity that borders at liqueur without really going there. Very long and the most animalistic. 1000 NIS.

This is less wildly expressive, yet very classic and presents Gevrey sauvage in an elegant frame. It's ready, showing mature complexity and gastronomic finesse. The most complete wine of the evening. 695 NIS.

This makes for a striking contrast with the 2001, although the family resemblance is obvious. It's less complex, less approachable, but with greater power. The least evolved and least expressive wine of the evening. 785 NIS.

This is less complete than the Corbeaux 2001 and less expressive than the Charmes, the night's obvious stars, but there is wonderful freshness in here and the swath of sauvage cuts deeper. There's sweetness of fruit, too, but one tempered and sautéed by age. It's not a great wine, just a very good one that has aged well and which shows interesting complexity on the finish. 1100 NIS.

There's a joker in every pack. This is hardcore and rustic with an expressive stink you either love or hate: balsamic vinegar, salami, mushrooms, epoisses. The palate is a long, expressive composition that scowls and smiles at the same time. 1500 NIS.