The Potter, the Polenta and the Halutzim Street Shuffle (May 20, 2015) 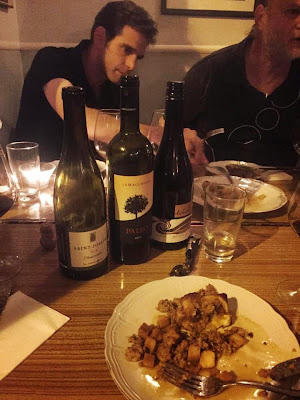 Now, before we start, I'd like to point out that the plate in stage front contains my favorite dish in Tel Aviv: small bread filled with pork and bacon and herbs - and shit, I'm hungry again.

I flew this in from Frisco, expecting  a more captivating wine, and would probably have gotten one - two years ago. This is lightly oxidative, with baked apples and brioche - broad, fat, without the focused sparkle of a really fine Champagne. The mousse fades quickly in glass, although the few glasses left in the bottle at the end of the dinner work better as a digestif, oddly enough. The reason I had looked forward to this wine is that, beyond the house's reputation (and a Champagne vintage I like very much), this is unique in being a blend made of equal parts Chardonnay, Pinot Noir and - get this - Pinot Blanc, which is perfectly legal in Champagne, just unusual.

This is classic cool Chablis, detailed but in need of time to open up. More minerally than marine, so while there's that classicism and typicity, it does nod at Puligny as well. So far so good, but having said that, as far as things like density, complexity, depth and length go (that is, the properties that define quality rather than origin), this is just a village wine, which I find typically smaller scaled than village wines from the Cote de Beaune to begin with - I tend to think a Raveneau should punch above its weight, but this isn't the case.

Avi Feldstein, the Jack Kerouac of winemakers, cursed us off for using the adjective "delicious". As his curse alluded to our sex lives, and I don't want to risk a life of mediocre coital bliss, I'm going to dance around the point and tell you that somehow this wine hypnotized me into coming back for more, which I think has to do for the interplay of raw meat and light hints of black pepper on the nose that complemented the succulent fruit, not because it was tasty or anything vulgar like that.

This Tuscan Cabernet Franc is well made, but is challenging for being as enveloped by oak as any Right Bank of a similar age would be. Don't look for Loire here, and don't try to match it with Eytan Vanunu's cuisine.

Grenache's saving grace. There's exotic complexity here, wrought of a small number of components, like white pepper over fresh, lightly candied fruit (which is Grenache's trademark). A great surprise. I mean, look at me, great Francophile that I am, falling for this. In my defense, I'd just like to point out to the jury that this is probably close to what Chateauneufs would taste like if Parker hadn't spoiled things for us classicists.