This being a basic Barolo purchased for 30 GBP in a London supermarket 2 years ago, I didn't see any upside in aging it too long. It has the typical herbal, dusty, iron aromatics, surprisingly complex, and while the tannins are still stern at first, with air, they impart a long, spicy effect so that the overall impact is tasty in a rustic, yet clean manner. Nothing outstandingly great about this, just a nice, moderately expressive wine making for a fun evening in front of the TV set, a very good buy and an even greater surprise. (Jan. 3, 2015)

Syrah 50%, Petite Syrah 25%, Carignan 25%. It's hard  for me to say which variety dominates and what each contributes. Right now, this is midpoint between herbal, floral and peppery, with fresh fruit and ample complexity. I always like Ido's work, and this is a step up from last year's version, which I liked enough, probably because 2011 was a better vintage in Israel. Very drinkable, high class, and a good place, for me, to head for when I want a Mediterranean wine. (Jan. 7, 2015)

I finally open a good bottle and the cork crumbles! Anyway, green apples, petrol and dill here make for a really complex nose that's everything Saumagen is about when it's on: a small scale grandeur that evokes, for me, bread ovens and wheat fields (and it's been ages since a K-R made me feel that way). A fine, dry Auslese, with just a hint of sweetness on the finish. My purchases over the years performed erratically, but if they were all like this bottle, I'd have bought cases. (Jan. 8, 2015)

The Sizeranne 1998 was the first great wine I ever bought, twelve years ago*.  Not everyone is enamored of the Sizeranne, generally speaking, but in a good vintage, and if you can get it for a good price (and re the 2005 I did, for 200 NIS at Wine Depot), it's one of the best values in the Rhone. 1998 was one of the best years ever for the Sizeranne and the 2005 actually lives up to that level of quality, even if it is currently only a year or two into its drinking window - which in  Hermitage terms means adolescent, so it could still use a few years to soften. This is lovely, text-book Hermitage, with black pepper, leather and bacon on the nose, the fruit very mildly sweet in the initial attack and then tapering off to a tannic, rusty finish, that grows very supple with air. (Jan. 10, 2015)

* As a side note: back then, provenance for the Sizeranne was iffy: the 1996 had been badly stored and by my count four out of five bottles that I had encountered were off. One bottle of the 1999 was suspicious while the 1998 was just fine. Ironically, the high tier Chapoutier Hermitages were so rare and expensive they were safely stored in private cellars before we blue collar wine fans could ever get our hands on them, hence the importer storage conditions was moot).

Simple fare, a Chardonnay on the tropical end of the spectrum, which seems unoaked. A very decent quaffer, with a touch of minerals. (Jan. 11, 2015)

This is a blend of Pinot Gris, Riesling, Semillon, with the Riesling in the background (as apples) I think - but it doesn't matter which grape plays which instrument because the thing that really captivates me about this wine is the way the blend begets a speckless new breed: Griesellon. Which is floral, fruity and saline, with great purity and clarity. (Jan. 14, 2015) 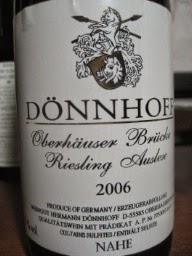 The sweetness is starting to recede, so the balance of fruit and acidity is quite racy. Subtle complexity is the keyword, as it seems to be in a reticent phase, so even after it blooms and fans out with air, it still plays out in sotto voce crystalline, mineral notes. For me, that very understatement is what makes this a great wine. Even the botrytis ia very delicately embroidered into the fruit. (Jan. 16, 2015)

This is one incredible Aligote! At a little over seven years of age, the color is pale enough to to fool any blind taster into thinking it was only a couple of years old, while the nose has the fine, complex mineral notes and light hints of roasted almonds of an especially elegant Chassagne, maybe even a Puligny. The palate gives the grape away, not because it's inferior, but simple because few Chardonnays, even from the Cote or Chablis, have such racy acidity. There's citrus fruit in there, and I don't know how to fit that with the rest of the note, but I really like the way it plays. (Jan. 17, 2015)

Burgundy Wine Collection, 200 NIS. I usually think Leroy is over-priced, despite the pedigree and quality, but considering how good this is, I'd ignore the lowly label and say outright that this is a great value.

As always, this bargain basement vintage cuvee is pleasure. This particular bottle is right at the plateau of maturity, full of brioche and nuts and mushrooms. I'm running out of new things to say about it, although I'll never stop loving it. (Jan. 22, 2015)

I used to think Chablis is the shit, and it still is, in many ways, but the "but" here is that my interest level has waned. I think one of the reasons I grew disenchanted is that the playing field just doesn't have great breadth and that once I went through the range of producers available locally I just grew bored with the lot (except for Raveneau and Dauvissat, which are too expensive and rare to get bored of). Anyway, this is still good stuff. This has a dour personality, but regal dour. It smells like the fish docks around sunset and tastes like sour apples, a little soupy on the finish. The fact that it becomes fat and dull after an hour might be typical of my disenchantment. Or of 2006 whites inability to age gracefully. (Jan. 25, 2015)

This is a charming, unoaked Mourvedre. It's lightly green and floral, peppery, clean and tasty. I think the world is a happier place for little wines like this, and I hope Wine Route's marketing machine manages to find a market for it, year after year, (Jan 27, 2015)

Dani Galil has started importing a few Italians. He told me to open this one quite some hours before drinking, so I slow-oxed for about seven hours then lowered shoulders and waited another couple.

This is a blend of Merlot, Cabernet Sauvignon and Syrah. The initial sip after lowering the shoulders shows a modern, very well made wine. The oak is in there, that's for sure, but the winemakers made sure not to overwhelm the fruit. Despite the French varieties, there is a distinctly Tuscan feel about it - except that Sangiovese would have a lighter touch in a similar entry level niche. There's chives and minerals, and the Syrah contributes a dash of black pepper, so there's a nice vibe to it, but even after all those hours of air, it's too grainy for my tastes. (Jan. 31, 2015)