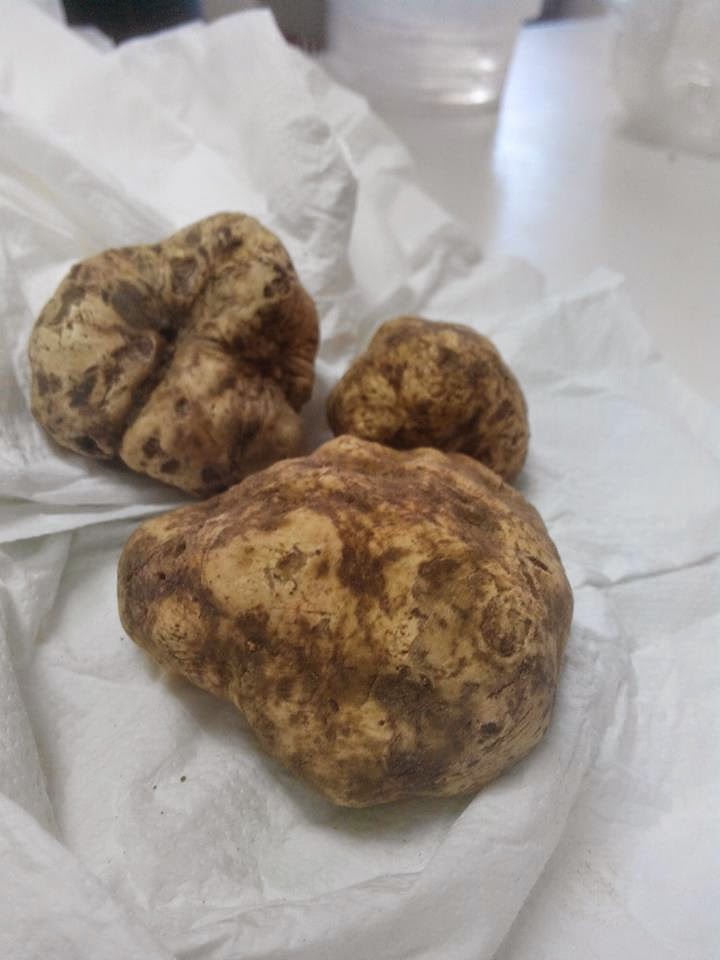 There's a story behind how Roie, Amit and I once again became a minority in a group of winemakers drinking fermented grape juice. But the bottom line is we ate some yummy white pizzas topped by truffles at Nono at Hod Hasharon; and we tasted, by my count, at least three memorable wines.

I wish I had more 2002's because the better ones feel like they could go on forever. This is steely and refined and, just coming out of adolescence, proves how fresh Champagnes can be. Then there's the usual Champagne checklist: pungently green apples, baked dough, mushrooms. This cost about 55 GBP in London and fuck, fuck, fuck, I should have bought more.

Style counts as much as quality: this is one of those dry Rieslings that create inner conflicts for me - it's obviously excellent, complex and long, but the oxidative winemaking produces a wine that appeals to my brain much more than to my heart. There's enough slate and apples and dill to point at the Mosel, yet enough petrol to convey an age older than six years old.

I proselytize 2008 Bourgogne, so this embarrasses me. The aromatics have potential, with black pepper and hide that point at other regions and grapes, but the palate, ugh, is an uneasy blend of sweet fruit and sour.

An interesting nose but off putting, where Burgundy should really make at least an honest attempt to seduce. The palate is better than the nose, though. What a shame, as I loved the Blain Gagnard red Clos St. Jean in 2011.

Back to Elegance-Land. This is earthy and appealing, with languid fruit cloaked by meat, pepper, flowers, rust. Great to know how effortlessly Graillot can age.

Let's face it, with most good Nebbiolo, you spend half the time admiring the aromas and half the time trying to get past the tannins. Until you've aged it for quite a bit. Fortunately, Barbaresco comes around earlier than Barolo, so this is tasty and friendly.

This is my first encounter with the Freisa grape and it comes off as  hard as Nebbiolo, but with arguably less appealing aromatics. Especially here, where the nose is tinged with modern-ish vanilla.

Basically, what you want from a Vosne-Romanee Premier Cru is a lush and exotic effect, buffeted by velvety, yet restrained trappings. And you get that here, once the wine brushes off an initially modern and oaky disposition and starts to discourse on its potential.

Funky and meaty, even exotic, with persistent yet mellow acidity, this is very, very interesting and I'd love to run into it again. I've been doing this for twelve years, so you'd think I'd stop thinking in Old World/New World terms, and yet... I'd call this an Old World style with a New World veneer. A revelation for showing what California can produce.

Even funkier than the Broc, with acidity almost as fine. A fine performance, although I have to wonder what the world is coming to that a five year old Brunello is this drinkable, without at the same time being a modern-styled harlot.

This is what I was able to decipher of the label, but Google can't find a trace of the name. Hmmmm, a charitable man would call this very mature, one of nastier mettle would say it's over the hill.

Oh, my! This is quite nice. There's luscious breadth and length of fruit here, and I'm almost sure some botrytis. Winner of the dessert wine flight.

And the loser of the dessert wine flight is this, a Vin Santo by any other name - it's not allowed to use the DOCG as the alcohol level is below the mandatory 13% ABV. Vin Santo is quite possibly an acquired taste, one I have no intention of acquiring.
Alain Graillot Broc Cellars Castello do Argiano Clemens Busch Clonakilla Delamotte Domaine Blain-Gagnard Domaine Georges Noellat Domaine Roy Marc Fattoria Corzano e Paterno G. D. Vajra Scarpa