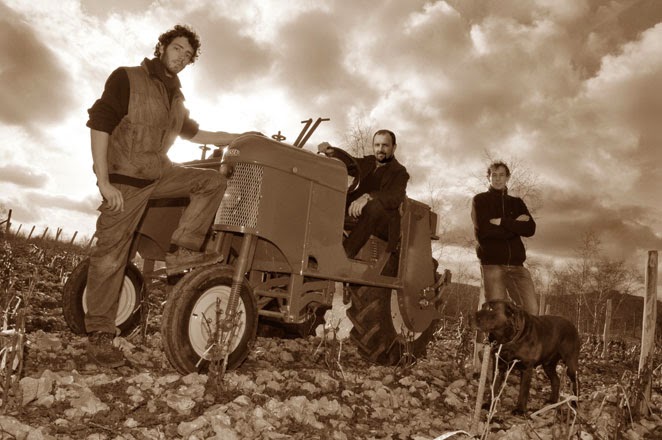 So this is the new guy that Uri Kaftori and Eldad Levi are bringing in. While the domaine is not enough of a household name for Cellar Tracker to hold an entry for every wine and vintage, it seems to be an under the radar gem and the producer site is very well designed and elegant.

And how were the wines?

Well, fresh, saline, honest and classic are words that come to mind. The Petit Fume might strike you as a simple table wine if you drink a glass or so, but if you delve into a bottle over a couple of hours, it's going to offer more than a mild surprise. The Les Tuilieres and La Moynerie have noses McNamara and Troy couldn't build for a million bucks. And the Les Cornets is easily the equal of a Chablis Grand Cru. What a voyage these wines took me through!

This serves very, very well as an entry level wine, fresh and tasty, showing an austere, chalk laden version of the Sauvignon Blanc fruit, very nicely built: i.e., with no glaring faults, while, on the other hand not a technical wine, with the saline finish riding some tasty acidity raising my interest level. In short, fully complies with what I look for in Sauvignon these days. (Jul. 25, 2014)

I don't have enough experience to tell  Pouilly-Fume' and Sancerre apart, but I somehow always expect a Pouilly-Fume' producer to perform worse in the Sancerre climat - and vice versa, of course. Well, I'm drinking through my purchases days apart, so I can't really make a valid comparison, but this hints, just hints, at the New Zealand style, cat piss and gooseberry, but classically formed, not tropical, with a solid backbone of minerals that sparks a salty finish. These minerals, in fact, capture the aromatic spotlight as center stage - in fact, you might not believe Sauvignon Blanc could be this mineral-laden. It may be softer than the Pouilly-Fume's, but doesn't feel like a step down.(Jul. 30, 2014)

The nose here offers dried grass in addition to fossils and gunpowder, the fruit leaning towards green apples and fuller than the Les Tuiliéres. Differences in descriptors apart, this is just much more of the same, quality and style wise, of all the Les Tuiliéres have to offer. It's inscrutably better, at the very least more impressive - easily as good as an excellent Chablis Premier Cru. (Jul. 31, 2014)

Like I said above, a Chablis Grand Cru, except it wouldn't necessarily need 7-10 years in the cellar, but it would fool you in a blind tasting (however, Chardonnay has a dollop of baby fat even in lean years that this doesn't). The similarity is quite fitting, as this is the one wine in the Redde portfolio sourced from strictly Kimmeridgian soil, like the best of Chablis. The nose is more elegant and suggestive than the La Moynerie, the fruit leans towards lime this time, but here, too, the mineral essence has an almost three dimensional, sculptured feel. (Aug. 24, 2014)

urgent loan offer said…
We offer a wide range of financial services which includes: Business Planning, Commercial and Development Finance, Properties and Mortgages,Debt Consolidation Loans, Business Loans, Private loans,car loans, hotel loans, student loans, personal loans Home Refinancing Loans with low interest rate at 3% per annul for individuals, companies and corporate bodies. Get the best for your family and own your dream home as well with our General Loan scheme. Interested applicants should Contact us via email: (creditloan11@gmail.com)
December 1, 2018 at 6:42 AM