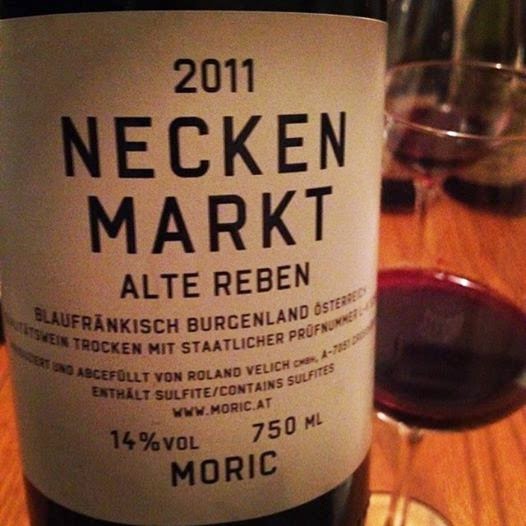 This was a very special tasting I put together with Eldad Levy. I'd brought four red wines from a trip to Vienna, and Eldad, whose portfolio has a lot of white Austrians, had brought a few samples from his latest forays, as well as a Loire Chenin Blanc to wake our palates up.

I bought two wines in a Vienna supermarket and two from a wine store. In all cases, the producers were top notch and I had high expectations. However, although the wines were well made and tasty, and good values in terms of their local prices, they are a modern (read oaky) sort, which detracts from their appeal. I have to admit that Eldad's offerings trounced mine at the tasting.

We started out with a Chenin Blanc to rinse our palates and then a charming, unpretentious Austrian red that Eldad has been importing for a while.

Lime, melon, piercing acidity, ripe, but totally without flab or fat. Minerals, flint. Very good and tasty as spit. If Eldad winds up importing it, this could well turn out to be my white house wine for the summer.

Very pure and tasty, like a good Gamay or Cabernet Franc. All about fruit and charm, with no modern trappings or manipulations.

And then, the two supermarket wines, which had cost 10-15 euros.

Peppery, meaty, tasty. A good value wine that I would buy for a house wine, if it made economic sense for anyone to import it and price it at something approaching its price in Vienna. In the context of the tasting, seems overdone, yet underwhelming. We probably should have had it with food.

Similar peppery aromatics, although cleaner and more floral  than the Pittnauer. Longer and more balanced on the palate, with juicier fruit and acidity. Obviously, the best of the two supermarket purchases.

Another step up. Very modern during the tasting, it had shed quite a lot of oak by the time I finished the rest of the bottle the next day, showing a peppery, meaty personality akin to Syrah. I really do think it has enough substance to absorb the oak.


We took a breather from my wines to sample some of Eldad's stuff. Salvaging the tasting, as he put it. He was probably right, although I'm not sure we didn't open the last two of my wines a few years prematurely.

Moric was an eye-opener for me a few months ago, and the main reason I targeted reds instead of whites on my Vienna outing. This doesn't go for modern thrills or frills and is the most drinkable wine so far. Lets the fruit talk, and the oak takes a walk.

Marries the upfront appeal of the wines I brought with the laid back ease of the Moric. Just about as good as the Moric, which, considering the reputation Moric has already earned, is saying a lot.

More Burgenland than Pinot, assuming the inclination towards oak is a trademark, even though there is the grape's telltale forest floor. Arguably less manipulated than the rest of  my purchases but still less convincing than, say, the Gobelsburg. The remainders do show a tasty, saline finish and an earthy, pungent personality, so I think there's potential here that we might have missed.

Impressive, but still young and suffering from over extraction in its own way. But... excellent fruit, very balanced, very deep. Convincing enough to make me drool, even if I prefer finesse over the kind of intensity this brings to the table (although I suspect it could go in that direction as it matures).
Chateau de Hureau Ecker-Eckhof Heinrich Moric Paul Achs Pittnauer Schloss Gobelsburg Weninger