On paper, this should be an exceptional village wine: not only old vines but 50% premier cru as well. But 2006 can be a tough vintage and my Bourgogne cravings have been fulfilled with some ethereal creatures over the last year or so, thus this wine turns me uber-critical. The nose is suitably enticing and inviting for a Burgundy freak: red fruit that transforms into kirsch-like black fruit, upturned earth and rotting leaves, spices. The palate, though, shows the stingy 2006 tannins, making it an interesting wine that lacks sensuality. Nice acidity, though, so I'm willing to grant it the possibility of blossoming in five years or so. (Jan. 2, 2014)

A well made Chardonnay, made by my good friend Yotam Sharon (yes, another due diligence moment). It's very, very mute aromatically right now, but it boasts a tasty, salty finish. A bottle later in the month (which I will describe in a separate post) presented a much more convincing and elaborate nose, so stay tuned. (Jan. 3, 2014)

A really tasty village wine, with a lingering, saline, lightly tannic aftertaste. A touch of earth and a typical sense of an animal sweating next to you give away the origin, yet there's greater effeminacy and a smoother mouth-feel than I'd expect from Gevrey - but that's probably the vintage, which I love, and so should you all. (Jan. 4, 2014)

As deep and as dark as ever previous vintages. A charming bruiser, the nose already shows decent complexity, sporting black fruit, earth, black pepper, iron, and there's even a hint of garrigue. A complex, rusty/tannic finish and surprising acidity mitigate any possible palate fatigue. If the South Rhone was making wines like this, I'd still be a fan. (Jan. 5, 2014)

Some say this is one of the great value whites of the world, and I have to agree. This is very tasty and long - few other whites costing 17 USD are this long - with considerable complexity for such a young wine. Good acidity and a mineral underpinning, with a very distinctive presence on the palate. (Jan. 7, 2014)

When I first had this wine a year ago, I was surprised at the quality and vibrancy, because I never considered Faustino a major league player and because the 1999 vintage  was not reported to have been a real keeper. Then, the first couple of bottles were really slow to open up. The third bottle seemed to finally live up to the potential I spotted. But this last bottle - well, it's back to the drawing board. Not very complex, not very charming, making a journeyman appearance. Oh well. (Jan. 9, 2014)

This is a famous single vineyard Barolo, from a relatively unknown Conterno (Paolo is sort of the Third Tenor of the Conterno family, I guess), and it's a classic, with the all the aromatic trappings of Nebbiolo: tarry, spicy, musky - like coming home to a warm village home from a cold winter night. Good tannic persistency; the tannins alone would live forever, and so would the fruit and acidity at that, but it's drinking very well already. Although I must say that when the tannins cleanse the palate, they take no prisoners. (Jan. 11, 2014)

I bought this at the Heathrow duty free for 30-40 GBP nine years ago. Damn good value!

Alright, Elad, the Tuffe is finally living up to my memories of the 2009 I had last year: fresh red fruit that feels like it was just plucked off the vine, earth, lead pencil, tangy herbaceousness, a warm acidity and saline fluidity of tannin and fruit. (Jan. 16, 2014)

A dark, earthy, black fruited, iron-inflected wine, the kind whose aromatics suggest a braised stew. A rustic slugger, but one that can accompany a country meal, due to the acidity and saline finish. I like, despite the 14% ABV, which would usually make me hesitant. (Jan. 18, 2014) 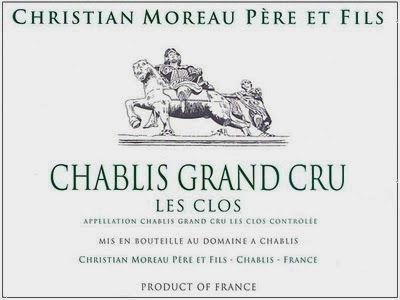 You know how a good Chablis is green like moss growing on a wind swept chalk cliff overlooking the Atlantic? Well, excuse me flowery prose, but I've missed drinking a good Chablis lately and 2007 white Burgundies have been drinking well for me lately, so I'm getting carried away. But what better excuse to get carried away? While my good friend Daniel Lifshitz says Moreau overdoes the oak, I think it's well integrated by now, asserting itself only at the very end of a wash of green apples and lime, where it's complemented by a saline sensation - I'm not going to say Atlantic salt, honest, it really reminded me more of pretzels!  (Jan. 23, 2014)

I'm still trying to Google where this wine came from. Jousset are a Montlouis producer, but this is a Vin de France Chenin Blanc and I can't figure out whether the designation is used because the grapes are sourced outside the appellation or disregards some vague AOC rules - my best guess, based on a Google translation of a French note I found, is that the grapes come from multiple Touraine appellations. Whatever, it's an elegant Chenin, marrying sweet, yet succulent, fruit with an acid driven persistence and a mineral veneer. Tasty stuff that I'd relish drinking more of. (Jan. 24, 2014)

This North Italian Gewurtz is much less extravagant than its Alsatian counterparts, more about spices and minerals than roses and lychee. It's also less aggressive on the palate than those cousins, the dry ones anyway. A nice surprise. (Jan. 25, 2014)

I wrote and raved about it, and I really don't have a lot to add, just to repeat that this is a flagship of the new wave of Israeli whites, and aims at a lithe, complex expression of minerals, rather than focusing on fruit. (Jan. 27, 2014)

So, one more CdP down, about six or seven to go. White pepper and garrigue on the nose, with ripe, candied, somewhat raisin-y fruit. The palate is actually sterner than the nose would have you think, but rewards with a gentle mineral tint on the finish. (Jan. 31, 2014)