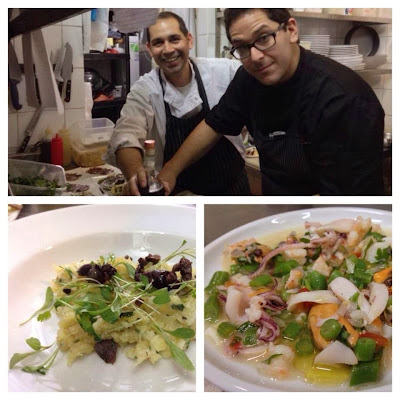 The Secret Place Restaurant is a project by chef Uri Levy, inspired by 'underground' Manhattan jazz shows, whose location is revealed to the audience by SMS a few hours before curtain time. Similarly, the Secret Place is a wandering restaurant with an ever changing locale. I actually didn't even know I was going there. A Gevrey tasting put together by Daniel Lifshitz fell through and he suggested we hang out at Tshernichovsky 6, a small Tel Aviv bistro, without mentioning it was taken over for the evening by the Secret Place.

It was a fun evening, meeting Uri, catching up with friends, meeting a couple of Facebook friends I'd never met in person, in addition to enjoying the dinner (I would donate a kidney for some the sea fare, arguably even my own!) and the wines below - since it was a night out with Daniel, we stuck to Bourgogne.

Expect the unexpected in Burgundy. The first time I ever tasted a white Boillot, I was sure it was one of the lesser lights of Burgundy. It created such a bad impression that it ruined Boillot for me for life, even though the second encounter knocked me out. Louis Carillon, on the other hand, is such a revered name that, looking at the labels, I was sure I knew who my favorite would be.

What a lovely nose, a little honeyed, with flint and dry grass and dem apples. Elegant without the four-squareness we usually find in Chassagne, and oak is only obvious, not intrusive. Tasty stuff.

An elegant wave of minerals promise a salinity the palate doesn't deliver. I know Carillon is the classic name, but this wine, at this stage, just doesn't work for me. In all fairness, I think it spent too much time in the cooler - or else not enough time resting after a very recent flight.

This is very complete and strikes a balance between power and finesse, such that it manages to show enough intensity to push the envelope of elegance without rupturing it. A complex nose, very deep, red fruit and minerals with a generous helping of garrigue. The palate is arguably even better and it is a true pleasure to drink such a classic wine at this point in its plateau of maturity.

A classic name, this requires more time to approach the younger Montille's state of drinkability. Darker than the Volnay, although not necessarily blacker, with a touch of flower, it is also more monolithic and backward. The potential is there, as this is meaty without being coarse, framed by fine tannins.
Domaine de Courcel Domaine Henri Boillot Domaine Louis Carillon Etienne de Montille