November 15, 2013
Some tasting notes from tapas bar and restaurant hopping on a short business trip to Madrid.

Soft and velvety, old school. Fruity and a little one dimensional, and a decent portion only lasted 15 minutes in fairly decent stemware. Just what I'd expected from a 2002, from what I'd read. I assume there was no Gran Reserva in 2002, in which case perhaps better fruit than usual went into the Reserva, so it might flesh out with a little age.

I'm not sure about the actual label. The wine menu offering is a fixed price for each region/designation combination. I paid for a Ribera Reserva but I don't see a Reserva listed on the winery's site, but it might only mean the winery is edging away from traditional labels. Anyway, the nose shows meat stink, and is more complex than the Tondonia, while the palate is lively and lovely, albeit ion need of time to gain focus. This is what I wanted to get in a Ribera: a mixture of old school and modern wine-making. Pretty much what I got, too, which seems to bode well for future purchases from Emilio Moro in general. 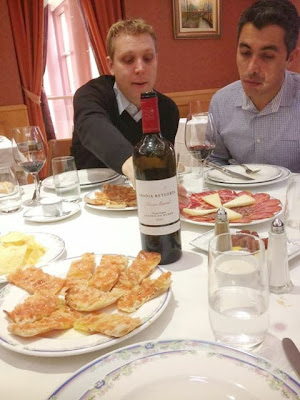 Black, smokey, mineral laced fruit. Good balance and fine tannins. Fairly complex, especially the nose. I ordered it because its been ages since I last had an Abadia.  Based on the Seleccion's showing, as well as that of the Emilio Moro (which I preferred), 2009 sure seems like a good vintage in Ribera (Abadia, although technically in Sardon, is on the Ribera border).
Abadia Retuerta Emilio Moro R. Lopez de Heredia