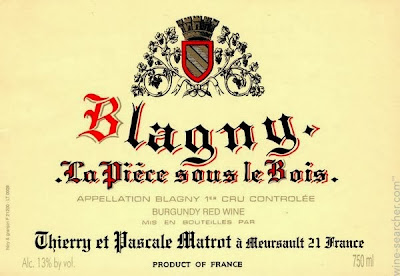 Daniel Lifshitz and I met up at Elba for a few drinks.

A very detailed nose: red fruit, upturned earth, a hint of flowers. Drinking very smoothly with lightly raspy tannins. My kind of Bourgogne, with just the weight I'd expect from a red Meursault Premier - which is basically what this is - and what's more, it has the presence of a Cote de Nuits Premier Cru.

70 USD. Not imported. Although Daniel regrets deciding against it, and after drinking the bottle I bought at Waltham, I wanted to punch his face in (but didn't, because he has a better physique and you know how crazy goalies are).

A fantastic mineral laden nose, detailed and complex, text book Chassagne, with no intrusive oak. The palate is still nubile and oak-bitter, with enough fat to warrant and require two-three years of cellaring. And thank God it doesn't seem like it will sour before then, as is made obvious when the acidity calmly asserts itself.
Not imported, price unknown.

Animalistic with a touch of flowers, good savory length. There's purity and presence beyond a 'mere' villages (the grapes are sourced from a vineyard bordering on the Gevrey Grand Crus), and the character of the 2007 vintage makes it way beyond approachable.