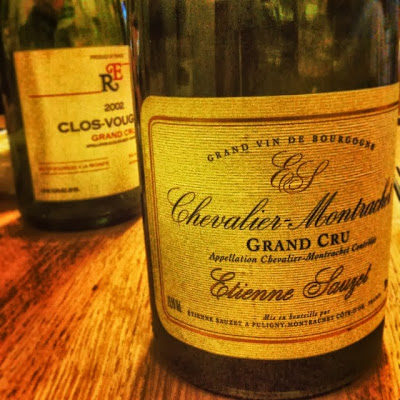 What if I told you of a Georgian dinner, paired with Bourgognes, served by an Israeli/Swede goalie? Daniel Lifshitz and his wife Ani put together a very fun event at Tel Aviv's Bin 281 (which Daniel calls his second home). The guy's a class act and a walking fountain of Burgundy lore and passion.

Does the price point matter here?

Light bodied, grapefruit, clay - proving once again that Aligote at the hands of a good producer can be quite fun.

Ripe, veering towards black fruit, spicy. I prefer the 2008, which had a much more idiosyncratic personality.

Perfumed red fruit with some black - spicy, long, structured and tasty, even if there is something unyielding about it. Daniel claims Grivot's Nuits bottlings are better than his Vosnes and I have to agree, especially if I compare this to the village Aux Lavieres that we had recently and that clearly outmatches this Premier Cru.

Complex earthy/spicy funk. Deep with subtle sweetness. With Engel gone, I just don't know how many more bottles I'll get to drink in the future, which is such a shame, this stuff being so great.

You can't buy these any more, obviously. Burgundy Wine Collections sells recent vintages from Eugenie, who bought up the estate after Rene's death, for 1200+ NIS, but I think this cost about 800 NIS back in the days.

Starts out closed, with a hint of tropical fruit, and a vein of spicy minerals. With air, the minerals become more prominent. But it still lacks the focused power I expect from a Grand Cru. To paraphrase Daniel, this is a good wine but not a very good Chevalier.