September 06, 2013
Aviram Katz brought it to Tel Aviv and this year, the Summer Of Riesling was so trendy that the city was covered with "I Love Riesling" graffitis.

But you know what?

Eldad Levy put together a Thai dinner, crafted by the talented and energetic Lilach Raveh, and paired it with (mostly) Austrian Rieslings. My report on the affair, along with other Rieslings I had the pleasure of drinking during the month long festival, makes up my Summer Of Riesling post. Enjoy!

Spritzy and refreshing. A great poster boy for the Summer of Riesling. 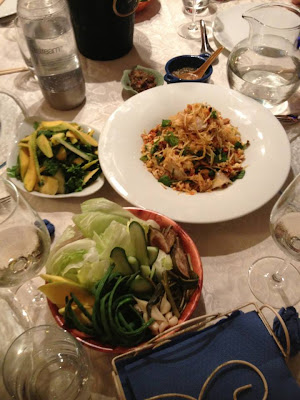 Typical GruVe. I get it now. Riesling is Muhammad Ali, Gruner is Frazier. And I love Frazier as much as I do Ali.

Refined and classy. There's added depth in there, along with the typical greenness of the grape.

More about Austria than Riesling, with citrus, apples, flowers, chalk and flint.

Wow! Petrol, sweet white fruit. Seems more mature than the age on the label, coming off as a seven to ten year old Spatlese, methinks. Need to get some.

Almost Sauternes-like on the nose: same strain of funky spiciness. A bone-dry personality on the palate, that is a complete world unto itself, laced with a salinity that justifies the umami reference in US importer Terry Theise description of the wine. I suspect that the regular Gaisburg will cellar longer (or at least peak later), but this is a wow wine for sure.

With family at Bertie:

This is still very young and unformed, all about green apples and chalk, without the brioche-led complexity that comes with bottle age. Nice and tasty, but I'd go for the 2007 if it's still available. (Aug. 16, 2013)

A nightcap back at home:

Complex and nuanced aromas and flavors of apples, nectarines, wet stones, ginger - stop  me if you've heard this one before, this shouldn't be about descriptors anyway, but rather in the aloof way it invites you to seduce it. The way it offers that elegant, airy yet intensive, mix of sweet and saline, who could resist? (Aug. 16, 2013)

Apples, peaches and a classy strand of marine funk - not unlike Chablis - tempered by ginger and menthol. The palate is tart, with a hint of sweetness, and works better than what I have experienced in the past with trokcen Mosels. Ready to come out and play, displaying yet another of the multitude of facets of the Riesling world: a lot of wine to sniff and drink, light Kabinett frame and all. (Aug. 17, 2013)

Now for the Alsatian candidate:

This is a wine that uses only three colors - green apples, quartz and kerosene, and celery, make that four, shades of the Spanish Inquisition! - but fashions a complex tapestry out of them. Said tapestry grips the fruit in an iron glove, releasing the fruit just enough to insinuate and tantalize. (Aug. 18, 2013)