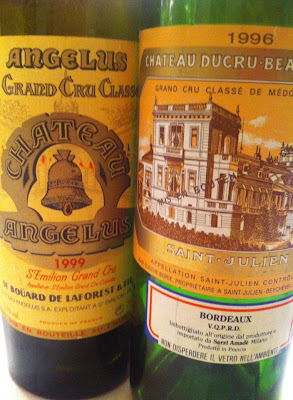 Not my birthday this time, but that of a much more generous gentleman, who hosted us rowdy lot at his home, dined and wined us, and presumably cleaned up after us as well.

Pears and dry grass. A savory/saline finish offsets the oak. A very pretty white that should drink young enough to avoid the usual Bourgogne premox fears.

Fine, discrete fruit, shut down enough that the kiss of oak is still blatant both nose and palate. I've drunk mature Sauzet so I know it should get better than this.

A gentler, subtler hand on the oak here, although it's obvious here as well. A hint of Atlantic on the nose and citrus. More balanced and detailed than the Sauzet, and the 2009 ripeness is well reined in.

Apples, slightly honeyed, with a vibrant streak of mineral. Very tasty and finessed, the lightest hand on the oak so far, with joyful acidity.

Pungent minerals, a touch of gaminess. Bright red fruit.  Light and rather short but fun.

A wonderful nose! forest floor deluxe.  Sweet red fruit. The tannins are harsh but the overall impact of the fruit makes for a very appealing impression. Likely the WOTN.

Green and earthy. A mean and lean claret, with savory tannins and acidity, with very low key fruit that gains better definition and deeper complexity in glass.

A complex, sexy nose. Earthy, very claret. Friendlier, sexier. Ripe and sweet, compared  to the Ducru, yet with a similar backbone of tannins.

Rainwater on the nose, limpid and sweet. Not the best representative of the Montrachet name, to say the least.