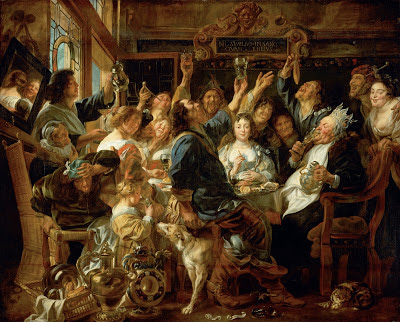 Once again, it was time for hearty food and tasty Bourgognes. I headed out to Elba with the goalkeeper/importer and his erstwhile business partner, the Man From Babylon and the diamond guy and his family.

The bottle I had in Bedford was just about Premier Cru in quality, while this seems like a vin natural that didn't survive the flight to Israel. No fruit, no structure. No fun.

This had such a discouragingly old brown color that I asked for it to be served as early as possible, and not tempt fate by letting it breathe too long, but it turned out I was over-cautious. The nose is complex and lively, with red fruit, bordering on black, spices, sous de bois. The palate is equally fresh, with decent-plus complexity and a raspy, tannic finish. Wonderful. A bargain Grand Cru that offers soothing finesse and breed, albeit without any great intensity.

Young and ripe, and quite modern: there's a gamey, slightly pungent stink which I find appealing, but it's counterpointed by ripe, candy drop aromas and flavors, which I'm less enamored of. I'd let it lie for a few years and try again.

An oaky and sweet facade quite effectively masks the mineral elements that lie underneath. A waste of Grand Cru juice, and what's worse, I suspect the winemaker intended the wine to be like this in order to court the American market (or, at least, Fontaine-Gagnard's notion of it).

Mineral laden, lightly pungent and focused, with dusty, savory tannins. A coiled spring years from unfurling. This is very fine, and I salivate at the notion of buying the 2010.

Will be featured in the Bourgogne Crown catalog around December.

A wacky mix of subtly fecal mineral stink and flowers, with visceral acidity. One of the better, more focused white Burgundies I've had recently.