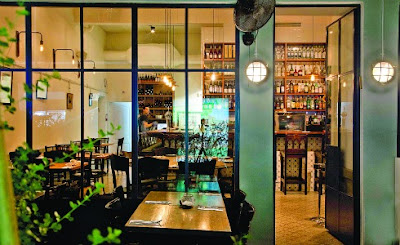 The last time I was at Bertie, the evening was terribly fun, with great wines - but I had to pay the piper the next day, and the next, and the next, for months on. In short, my last visit was a short, blissful reverie before I discovered the terrible price of moving up into management.

I learned to cope with the position. I learned you sort of have to be the Fonz even when you're fucking up like Potsie.

Never mind. This one night, almost half a year later, was the closing of a circle. Even if I did spend a third of the time reading and answering work related emails.

Dry Riesling? Yes! Minerals, lots of them, spices, apples, summer fruit and pits of all the former.  An intense wine, offering compelling grip and complexity. Ready to go, with a little air, and since I personally don't approve of cellaring whites with 14% ABV and above, I would open any of this that I have sooner rather than later.

At first I thought this proves my bias against buying, let alone aging, expensive white Burgundies, but this is an excellent, pleasurable wine, given enough air. It starts tight and oaky, then shows dried grass, flowers and minerals. Damned elegant.

This registers as a savory Left Banker from the first sniff: Cedar, minerals, very light brett, black fruit. The palate is still tannic and I rather expected more of it, but this offers plenty of reserved claret charm.

I would have loved the GPL in its own right, and I would have thought I would have preferred a claret over a Brunello on any given day, but I found this a step up, or at least it proved a more immediate pleasure. There's nothing earth-shattering here, and in its way, it's a rather generic Brunello, but it's a succulent food wine with an interesting nose that shows cigar box, carpet dust, chives.