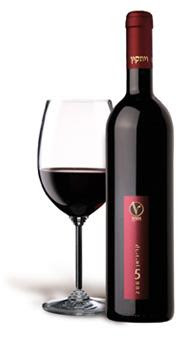 I admit that it's not a coincidence that the people making my favorite local wines are drinking buddies, at the very least, and good drinking buddies at that. For one thing, I like wines that capture not only the the spirit of the land, but display some essence of the winemaker's personality. So, it stands to reason that likable men and women are going to make likable wine, and, Israel being a small country, I'm likely to run into them. And, all other things being equal, I prefer to do business with friends.

But I liked the Vitkin Carignan even before I ever met Assaf Paz, and the reason I wound up buying a six pack from winery was this. I enjoyed the Carignan 2009 a few weeks ago and told Assaf I regret never aging any, and he told me the winery was selling some library wines, so I bought a Carignan 2006, a Riesling 2008 and rounded out the purchase with a few bottles of White Journey 2010.

How were the wines? a sage reader might ask.

Something must be driving local vignerons to make eclectic white blends. Maybe it's just easier to blend Viognier and Gewurztraminer in Israel rather than make varietal wines out of them. Whatever, here they're complemented by French Colombard and Roussane they make for a very interesting, Mediterranean quaffer,  somewhere between the Rhone and Italy in style and flavors, with quite a lot of complexity and stuffing for the price tag. Aromatically, the Viogniner and Gewurtz seem to dominate (because they're bitches and do that and I don't know French Colombard and Rousanne enough to note their contributions). There's a fair portion of acidity here, which is either very careful or adjustment or the French Colombard making up any deficiencies on the part of its fattier, lower acidity playmates. Which just proves why it was a good idea to make a blend in the first place. (Mar. 18, 2013)

About 60 NIS. Your mileage my vary.

The question every Riesling lover will ask himself when drinking this (or, indeed, any New World Riesling) is: "which paradigm does it remind me of?" Germany? Alsace? Austria? Well, a little of all three, although as far as body is concerned, it's as lithe and steely as a decent Teutonic. It has the aromas of dill and petrol of a fairly mature specimen, although it's very fresh and vibrant on the palate, with green apples and a mildly spicy punch, and you can just taste the warmth of the local climate, without any accompanying fatigue. It's not especially complex, but its charm is unquestionable, even surprising - despite my bias towards Assaf's work, it managed to catch me off-guard. (Mar. 19, 2013)

The wine that started this all thing.

Sweet-ish blackcurrant fruit with pepper notes and hints of cedar and leather. The palate is quite balanced and elegan, in it its own manner, beneath the muscular facade, containing its 14.5% ABV quite well. It's in a stage of healthy maturity and still displays varietal traits, showing decent complexity and definition, although I wish it had a tighter grip - although the finish is admirably tannic, the mid-palate is too broad for comfort. It's still living up to its reputation of being one of the winery's best loved wines. (Mar. 22, 2013)

To put things in perspective, here are the two other prominent local Carignans.

Beneath a dense facade, laden with mineral, sanguine notes, is tasty, earthy black fruit, with meaty, savory tannins and lively acidity. I'm a fan, but judging by the indifferent reaction on the part of the neophytes round the table, I would cellar it for a couple of years before serving it to the uninitiated. (Mar. 16, 2013)

The has the most developed and appealing nose of the three, with comely herbal and earthy notes. This might not have been designed to age (I certainly didn't cellar it; this was a surprisingly mature holiday gift from work) and everything that could possibly have ever resolved on the palate already has. I know it's not especially deep or compelling, but it's a great little food-wine and if I'd drunk it out of a carafe in a bistro in Europe, it'd have my attention and appreciation. (Mar. 23, 2013)