The nose is, right now, as complete, as complex and as deep as Chablis Premier Cru can ever get (well, if you're not a Raveneau or a Dauvissat, that is), the marine aromas so fully realized you can just feel the beach sand between your toes. The palate is pretty good, too, what with its mixture of just ripe fruit and bracing acidity. (Oct. 1, 2012)

WineRoute, this is typically in the 140-180 NIS range, barring the usual sales and discounts, which I'm growing weary of listing.

This, like the 2008 Fevre, is savory, mid-tier Chablis at its best: lime and green apples on a bracing background of marine minerals. I loved the 2004 a couple of years ago, and here I find a wealth of aromatic nuances and a tightrope balance of ripe power and cool elegance that convince me this will be even better than the 2004, when it also reaches six years of age. (Oct. 27, 2012) 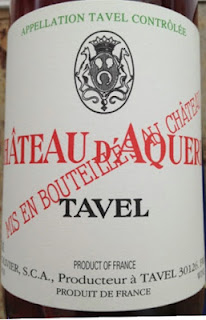 I got into rosés four, five years ago when Giaconda started importing this Tavel, then always planned to make it a habit, but never quite got around to them, until the Shvo caught my attention. So I bought another bottle of the d'Acqueria, which waited in the Giaconda storage until we managed to find the time to settle the delivery and by then, summer was almost gone. This then offers plenty of strawberries, watermelon and pomengrate, tempered by a healthy dash of spices and  minerals (and just a hint of mustard) that serves to add enough complexity to tempt the intellect. It's not a light, friendly quaffer, and offers an interesting challenge on the palate, which needs time to get itself acquainted with the stemmy bitterness on the finish. And airing doesn't hurt it, either. (Oct. 4, 2012)

Giaconda, 90 NIS. I'll score for a change, just to highlight an interesting aspect. At first pour, this is an 80. A couple of hours later, close to a 90. Outrageous behavior for a rosé. Is this an acute showcase of the Tavel mystique or something?

On this first personal encounter with the classic German Riesling, my primary concern was how well pure, crystalline fruit of prime Riesling would interact with the side effects of secondary fermentation. Turns out, quite well. There's no brioche or nuttiness to obscure the smoke and chalk that demark the fruit, just a very light hint of freshly toasted bread, and there's a very nervy backbone to the fruit. My secondary concern was how much I'd like a brut from the Rheingau, a region that's never bowled me over with its dry Riesling - and whatever dossage goes into the making of a brut, the end result is 12.5 ABV, which is dry enough for me to worry. This turns out to be a non-issue as well. Bubbles and Riesling make a happy union here, and while they sing on a higher scale than Champagnes, it's a baroque voice I'd enjoy hearing more of. (Oct. 8, 2012)

Here's why I need to drink more Italians: 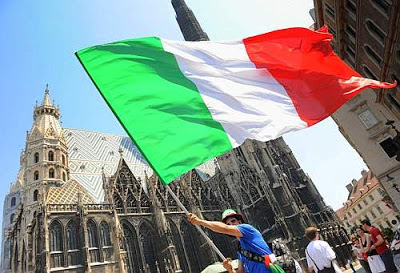 This was on the lower end of the Giaconda Italy catalog, but it caught my eye when I was looking for honest representations of regions I wanted to get to know better. See, I've had a thing for Aglianico since the days Anavim used to import Paternoster. Whatever, it was a good hunch - this is terrific value. A tasty, saline wine with no sign of oak and a typically (for me) Italian chive and tobacco combo on the nose. Also on the "why I love this checklist": juicy acidity and caressing tannins. A real pleasure to sniff and drink. (Oct. 9, 2012)

Of course, I never need an excuse to drink German Rieslings...

A Donnhoff Riesling,  even at the Kabinett level, is always a great exercise in balance and focus. This offers red apples with just a hint of peaches on a background of minerals and a touch of mint. This is where the Nahe is the most akin to the Mosel, although the Nahe is perhaps less nervy in its youth? But I hate to generalize based on the small sample I'm exposed to. (Oct. 10, 2012)

Apples melting into peaches, dill, petrol. There's a touch of intoxicating complexity on the nose. The palate has a heady sweetness that makes sudden turns between cloyness and airiness. The bottom line is its tasty and I like it but it's not as profound as I'd hoped it would turn out to be. (Oct. 11, 2012)

I've said it before, most of the Domaine's lower level wines punch above their weight, and this is no exception. I'm not sure it's even a villages, but it drinks like a very good one. It's a very joyous style of red Bugundy, redolent of strawberries, forest floor and minerals. There's a slightly bitter streak to the otherwise savory tannins, but while it detracts, the saline acidity makes up for it, and the package in its entirety is a very appealing one. Especially the nose (well, that's Bourgogne for you). (Oct. 12, 2012)

Even in a warm vintage, Alix maintains a firm hand on her craft and steers this white in a direction I approve of. What we have here is the stereotypical Good Son of Bourgogne: flint, dry grass and pears with a touch of nuts; crisp and austere with a peacock feather of sweet apples, and, although not especially complex, quite the charmer. (Oct. 14)

The initial attack is on the sweet side, reminiscent of cranberries, on both nose and palate, and the flavors are a bit insipid, hanging on too loose a framework. But there's an undertow of forest floor and flowers and a tannic bite on the finish that keep my optimism up - repaid when the juice fleshes out with air and time. It's not as good as the 2008, but tit's still a tasty, sanguine Burgundy quickie. (Oct. 26, 2012)


This is a round, simple Bourgogne, whose appeal is based in a one-two combination of black fruit and rotting leaves. You'd expect a '09 to be ripe and round, even on the generic level, but this is a tart treat, the way a generic Bourgogne often turns out in the hands of an excellent producer. (Oct. 19, 2012)

An utterly tasty showing: bright red fruit that is earthy and leathery, with a hint of exotic spices a la Cote de Nuits. Oh, that Old World savoriness! (Oct. 29, 2012)

This is a rustic, no-frills bubbly, that is more about Chardonnay than about bubbliness. I've written enough about it, so I'll just adorn our mutual history with this final observation. (Oct. 30, 2012)

Another 2003 Sauternes with not enough acidity for my tastes, this is better than the Guiraud, as it shows more finesse, the nose and palate both being more airy (well, the palate is still as viscous as you'd expect a hot vintage Sauternes to be, but it feels elegant despite that). The nose is especially enticing, with creme brulee and apricot marmalade over nuanced botrytis funk. There's still not enough acidity in it for the requirements my palate poses these days, but it does contain its 14% ABV better than I'd hoped. (Oct. 13, 2012)