The wines were on the eclectic side as well.

Mute and austere. with a disturbing note of mildew at first. Not very pleasant on the palate, but the nose at least does pick up honeyed nuances and depth. And the acidity is surprisingly lively, even if there is little nuance, interest or fun.

Not imported to Israel, price unknown. 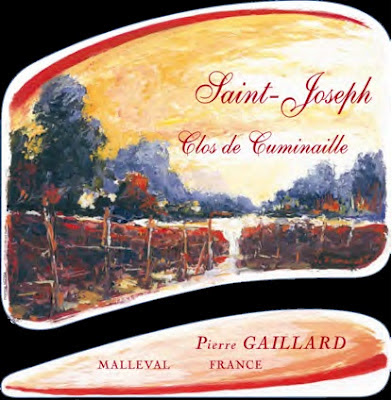 A lovely, classic nose: pepper, bacon and flowers. Still a little unformed flavor-wise, but charming nonetheless with a tannic bite and gives a complete North Rhone experience. I'd buy more than a handful if I could.

Not imported to Israel, in the UK THIS costs about 165 GBP per case, in bond. Special thanks to Eran Pick for bringing this. It might not have been the greatest wine in the lineup, but I'd been waiting some time to taste Gaillard.

Classic Left Bank, showing more cassis than currants, with cedar and minerals. Velvety despite a tannic bite. What a joy: due to the vintage, it's very easy to drink right now and will hold for several years.

Jammy, with spicy aromatic interest. This is sweet and has very little in common with the previous claret, yet there is some structure there. I think it's a typical Israeli boutique red that tries to curb the alcohol and ripe fruit as best it can.

Segal's Avi Feldstein's latest project displays red fruit, sweet tannins and just a note of vanilla which does doesn't infringe on my sensibilities but rather reminds me the 2001 Dishon Cabernet. I will just regard it as Avi's fingerprint. Very nice, I will look it up upon release.

Not released yet, price unknown.

And back to France:

A modern and sweet nose, cassis, figs with spicy, earthy elements. Sweet tannins. Tasty and somewhat elegant despite the size.

The Scottish Company used to import this, I think for about 200-300 NIS back in the day.

80 USD from K and L Wines and worth every bit.

A big claret with meaty tannins and black fruit, and noticeable brett. A conservative wine, in the good and bad sense - it doesn't really take a lot of chances, unless the brett counts, but it gets the job done. Good acidity though. I expected a bigger spark from 2000.

WineRoute imports recent vintages for about 450 NIS. If it were any cheaper, I'd say go for it.

Essence of  lychee and tofee. Very yummy, even if it doesn't have the raciness of a Riesling based icewine. Sweet and viscous.