The first winery I ever visited, just about the first bottles I ever bought, the first wine I served to friends at a gourmet dinner at home.

Things have changed since. Eran Pick has replaced the later Ronnie James (the 'father' of the winery) as head winemaker and  former Petrus winemaker Jean-Claude Berrouet (see below) has been consulting since the 2010 vintage. But Tzora is still a firm advocate of the concept of terroir, as the wines are designated by vineyard and not variety (and, indeed, the blend may and does change from year to year). I think they do a good job, and by that I mean wines that pique my interest, and apparently Michael Skurnik Wines share my enthusiasm: hey, look, a kosher winery is being distributed in the US not by a kosher specialist but by this very fine distributer of class, boutique wineries. 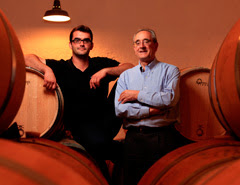 100% Chardonnay, but there's a tropical, grassy feel to it that reminds me of Sauvignon Blanc. Good acidity, no obvious sign of oak. Hints of minerals that grow stronger, a saline finish. A lovely wine that I plan to revisit.

A dense, masculine nose that reeks of leather, and not just of minerals but rather of rocks. Not overtly ripe, not very elegant either, but tasty and Old World in character. Doesn't show its 14.5 % ABV.

Continues the same theme, adding elegance yet even more primary fruit at the same time. Despite feeling riper and fruitier, it feels less approachable. So that's two contradictions, which makes things interesting. This also holds its comfortably contains its 14.5 % ABV.

Combines the best of both of the previous wines: the Old World leathery touch of the Judean Hills with the fruitier statement of the Shoresh. Albeit, the ripeness is more obvious, which might be vintage variation. I don't know, I like the 2010's more and I'm not crazy about the price either.

Very typical Gewurtz nose. The palate is lush, with low acidity. No great shakes but it's tasty and I'd definitely understand if it sells out fast..

All in all, I find the 2010's very appealing - despite my antipathetic, unpatriotic bent -showing Old World aesthetics while still displaying signatures of the Tzore vineyards that I recall.

This was supposed to be it for this post, but a few weeks later I attended a more extensive tasting at the winery, consisting of vertical tastings of a few of the dry wines above and I thought the additional impressions were noteworthy.

Saline minerals on the nose. Quite lovely. Starts out Sauvignon Blanc in character and becomes quasi-Chablis. A little tropical on the finish. Decently complex, might need a little time to round out a little although I'd drink it on the early side. I really like it, despite some obvious oak (but it's really at sweet spot where the oak marries the Chardonnay fruit really well).

Classic Chardonnay without over and/or overt manipulation. More reserved than the 2010. The acidity is still a little sharp. Less interesting, for me, than the 2010 - it's somewhat too obvious.

Now this really shows the tropical fruit of a Sauvignon Blanc. Delicious fruit, good acidity. I'll bite. The best of the flight. Subtle oak here. The minerals emerge in time.

Black fruit, minerals, gunpowder, some leather. Sweet fruit in mid-palate. Simple palate, the nose is better. A matter of youth? Might be better with appropriate food. Decent length. Much improvement in glass.

The fruit on the nose is more subtle. Better definition on the palate. After a while I find better performance from the 2008.

(3 hours in decanter) More Bordeaux than the previous wine, with an obviously Israeli flair. Black fruit with a leathery wisp. The most tasty and balanced, constantly shifting between the Bordeaux and Israeli paradigms. You can guess where I'd like it to end up as.

(Also decanted) A very Israeli nose. Ripe black fruit on the nose. Sweet fruit on the palate. The kind of well made local wine that leaves me indifferent, even when it picks up more aromatic complexity.

(Also decanted) Ripe fruit again, but more detailed and a little subtler on the palate. I prefer this. There's something about the spices here that balances out the Israeli ripeness that I usually don't really like. Later I decided it had a green tint reminiscent of old school Bordeaux.

Midway between the two previous. Blacker than both, sweet, but tasty for all that. Israeli but focused without the welcome green tint I found in the 2006. More powerful than the 2006 without being jammy. The 2006 is arguably the more interesting wine, but this might be the better.

For whatever reasons, I find it easier to get into the Shoresh than the Misty Hills, but I'll reserve final judgement until I taste the 2010. Eran is making obvious progress with each vintage, consulting nowithstanding -  Bourrouet only consults on the red wines and the improvement is as obvious with the Neve Ilan Blanc.

This artificial icewine has somehow developed botrytis-like mustard and dried fruit. The fruit is still lively, even if the acidity low keyed. My impressions of previous encounters don't make a good case on the merits of aging this (my formula is, if cellaring doesn't make a noticeable improvement or change, I don't spare the fridge space just for the sake of age), it sure was nice to re-visit.