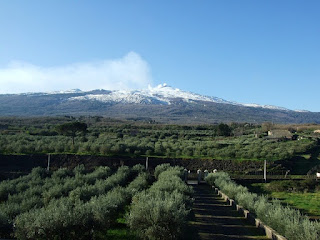 I guess Eldad Levy is not your average importer on the Israeli scene (he has various partners, but he's the front-man for all purposes). First he started importing grower Champagnes, at very reasonable prices, and for a few years he focused on that. Then he started importing white Austrian wines, again at very reasonable prices. And now, he's into Sicilian wines and the crown jewel of this new portfolio hails from the Etna DOCG: Terre Nere.

We started off with more conventional Sicilian wines, conventional in the sense that they come from a terroir more typical of the island - unlike Mt. Etna, which is, well, a mountain.

This is a family winery that Eldad discovered during the same junket that brought him to Terre Nere.

85% Nero d'Avola. No barrels. Spicy/earthy red fruit on the nose. The spiciness is echoed on the palate. A pleasant, tasty wine, with juicy acidity. Will make a splendid house wine, like a simple Bourgogne with more body. 69 NIS.

Smells totally different. I can't place the aromas. Not for the faint of heart. Gamy? Whatever, very comples aromatically. Ripe, juicy acidity again. A very interesting wine, tasty too, and the only reason it would fail as a house wine is that I don't see the mass appeal, but I like it very much. No barrels here, either. 99 NIS.

Older than the first of course, and a single vineyard - and 100% Carricante. Reductive at first. Spicy, intriguing, hard to fathom. Needs time to reveal whether the purity and depth of fruit I and others thought we'd spotted are really there or just wistful thinking. No price yet.

The 'hype' is that the Terre Nere reds are either the Burgundy of Siciliy or the Barolo of Sicily (as though it wasn't enough that these comparisons had already been made in the past for Aglianico del Vulture). From where I'm sitting, sipping my claret, I've never understood why people lump Burgundy or Barolo together in the first place, except for the recent emphasis on single vineyards. At any rate, I can spot similarities to Pinot, but not really to Nebbiolo.

98% Nerello Mascalese, 2 % Nerello Cappuccio. Promengates and flowers on the nose, which is another nose that's hard to place. Only this time, it's not because the context is as jarring as with, say, the Sachia, but rather because this entry-level red is sullen, earthy and not as obviously friendly as the reds from the west. 110 NIS.

Same blend as above. The nose is friendlier, and very earthy. The acidity is Bourgogne-like, and the body too, but the tannins, although light like a Pinot, have a different feel and taste. How should I put it? If the tannins of a fine Premier Cru is like an ardent lover gently scratching your cheek, here he/she is grazing your back. 210 NIS.

This finally truly lives up to the Burgundy connection and to the buzz about Etna. Red fruit, very flowery and, like some Bourgognes, it expands in glass. Complex with time and even more Burgundian, but a of different personality. Tasty and complex. 210 NIS.

The nose is even more more intense, bordering on black fruit. White pepper. Sweeter tannins. Makes an idiosyncratic statement like the previous, an intense, more overtly powerful contrast to the Calderara's femininity. I get the Pinot connection here, too, as there is a sweetness born of purity of fruit. 210 NIS.

The final steppingstone in this little series of single vineyards is the most intense, and mind you, in case you weren't paying attention, I think they're all good. Noble acidity. Coiled in complexity. Loads of potential while still steeped in red fruit. 210 NIS.
Caruso and Minini Terre Nere