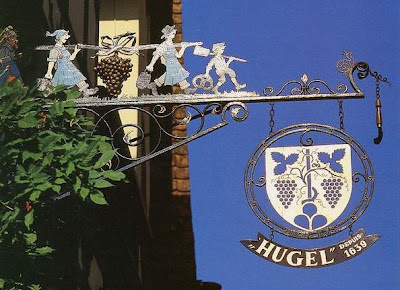 Go figure. I'm not a huge Alsace fan and I haven't drunk enough of Hugel to form an opinion, yet here I am. See, the importer used to be the France-Israel Group, which had studiously built themselves a reputation for expensively priced, indifferently stored, wines. In fact, they used to periodically sell at discount very mature Hugel SGN's; my peers and I kept a running tally on their condition and half a case in, we never ran across a live one.

But WineRoute has picked up the portfolio and now the prices are reasonable and of course WineRoute have a great reputation for impeccable storage, so things are are peachy. When they advertised a tasting of young and old Hugels, presented by owner Etienne Hugel, I was interested, even though the tasting leaned too much on Gewurtz for my tastes. Uh, I love Gewurztraminer every now and then, the same way I can enjoy ingratiating family once a year, but I wasn't sure how much I'd enjoy mature VT's and SGN's - or even young ones, given that they are Gewuztraminers - beyond my personal notion of their intrinsic value as curiosities. In the end, I'm firmly entrenched in the Riesling camp, willing to give Alsace a chance, but sticking to the Teutonic side of the borderlines.

So I've had my annual fling with the lovely slut of the grape world tonight, and we've both agreed to meet again in, say, a year or so. Let's just say I'm still not convinced that Gewurztraminer has it in her to make age-worthy wines, even stickies, and I will elaborate below.

A blend of everything, clean, crisp and light. Lime and minerals. At 59.90 NIS, I'd drink if offered a glass or two, but in no hurry to purchase for myself.

Young and floral, with a saline finish. Very pure, with that Alsatian quinine finish which works very well here. Develops appealing minerality in glass. Surprisingly fine, and I'd buy, if only because I'm sure Efrat would like it. 94.90 NIS.

100% Schoenenbourg Grand Cru. A light overlay of petrol that doesn't overwhelm the fruit. Additional complexity and presence. A study in minerals. Worthy of the Grand Cru label, even if Hugel doesn't advertise it as such. 199.90 NIS.

Floral. Textbook stuff for current drinking. You can read between the lines of this one-liner that I like, but am not bowled over with excitement. 94.90 NIS.

100% Grand Cru Sporen. Incredibly floral and at the same time spicier than the classic. Like the 'Classic', this is very nice, but I'm in no hurry to buy 199.90 NIS.

At first, the nose here is more about Gewurtz than about the nature of VT, whatever that might be. On the palate, great length with the overpowering presence of Gewurtz making this an academic exercise right now. But even as this wine presently (mis)behaves, beneath the sweetness and the Gewurtz spiciness, there is great focus. And with time, the sheer typicity of the nose kicks it into high gear. A second glass proves how balanced this wine is.So I guess this is worth the price of admission for someone with more loose change or a greater symbiotic bond with the variety. 499.90 NIS.

This too is primary Gewurtz now, and while at first I though this doesn't have the convincing presence of the others in the flight, some patience reveals similar focus. Which is probably the secret of these wines: a sense of laser-like focus to the fruit and a balance of sugar and spice. 499.90 NIS.

This tempers the Gewurtz with funky maturity. The palate strikes a balance between sweetness and power. A terrific nose, best of the flight. Until the 2007 opened up. 499.90 NIS.

This now shows great minerality on the nose, yet the palate struggles to contain the spiciness of the Gewurtz. For me, a disappointment, even though I managed to sneak a second glass, which still left me unconvinced, 799.90 NIS.

And now for the botrytis. There's the mustardy funk of the botrytis and a luscious mouth-feel, but like the VT, it shows the burly youth of nubile Gewurtz. The jury's still out. 599.90 NIS.

Reeks of age. Good age. Like, ah, the walnuty age of Oloroso, yet with the freshness of nubile youth. Although I must say the palate isn't balanced to my tastes, the spicy kick of the grape not properly balanced by sugar and acidity. A second glass is better, sparking contemplation. It's better balanced but the spices are still jarring. Let's say it pleases my intellect but less so my heart and palate. 899.90 NIS.
Hugel