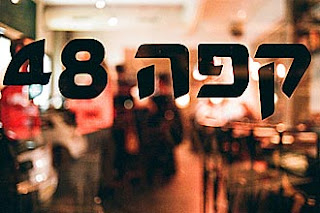 I wish I was better at writing about food, because any place that lists "pork belly" in its specials is love at first sight.

Walnuts, brioche, sweetness born of fruit not sugar, minerals. Full, surprisingly soft and approachable, flavorsome with sweet salinity on the finish. I think years from now I'll look back on this as the point where I became addicted to Champagne.

Faint whiffs of petrol, minerals and dill over white fruit. Perfectly balances sweetness and acid. This would merit praise solely for the minuet it dances with my palate, even if it is not that complex or gripping. But the gentle caress of Mosel is enticing as always.

Another Barolo? The nose is similar to the Corino, starting out red, tannic and earthy with notes of leather. Air brings out riper, sweeter, blacker fruit, rounding out too many sharp corner. Less my style than the Corino, as becomes obvious in time.

Not sure who imports it, list price is over 700 NIS.

Lovely stink of raw meat over lightly black fruit. A light body, so light I wonder maybe the brett killed the soft fruit here? Not sure. The bottle we drank a couple of years ago was much better. I doubt this is representative, as the 2001 was more consistent and I just don't see d'Armailhac screwing up a vintage like 2000.

This is stinky too, yet the stink here is more balanced than the d'Armailhac, and the palate is more savory. Soft red fruit, very enticing. Oddly enough, only a light layer of marine minerals identifies it for me as Arroyo, so there is a strange feeling of displacement once the wine is revealed, but that's just me being ornery - this is simply wonderful.

Soft black fruit, stinky again, with very balanced acidity and savory tannins. A very light overlay of minerals and minerals. Very good, although I like less than the Arroyo. Having said that, the success of a relatively modest wine like this (apparently, this is the smallest classified property in St. Emilion) is why Bordeaux rules!