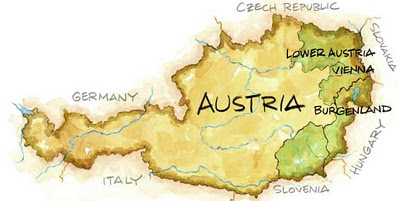 Hirsch, Kammerner Heiligenstein, Gruner Veltliner, 2010
I must be doing something right, if a knowledgeable blogger like bob68 has purchased a wine because of my recommendation (I'm sure most, if not all, of my Israeli readers read this very honest and detailed culinary and wine blog, which is more informative than any restaurant critic I've ever read. If you're not a local - you wish you had a critic this good at home!). However, as flattering as it might be, it kinda put the scare into me, to learn that he bought the Heiligenstein: what if he doesn't like it as much as I did? Turns out he did, only he didn't spot the minerality that I found in it. So I decided to open a bottle and check whether my impressions at home were in line with what I got at the tasting last month.
Well, it's just as good, to my great relief, and the minerality is still there, on the nose. It's a pungent sort, that reminds me of overturned earth and mud (and also something else, that I think is what a pond of fresh water would smell like, only I'm not sure I've ever encountered a pond of fresh water), but there is also a typical GV green peas thing going on, and if you try to focus on that, the minerals sort of fade to the background. If you wait a couple of hours, you will also find a floral element. On the palate, there are few traces of minerals; instead, there is fresh fruit running the gamut from green apples to peaches and melons and a bit of residual sweetness that combines with the racy acidity to make for a savory finish. So while it's crisp and light on its feet (unlike, say, Pichler and Nigl), you won't get the saline fuzz you'd find in archetypically mineral-laden wines, such as Chablis. So bob68 and I are both right.
Like I said last month, this wine has both immediacy and depth, and usually when a wine is this tasty now, I'd say drink up, but I feel this is just scratching the surface of its potential. The problem is, from that I've read, Gruner Veltliner doesn't move a lot in the first few years. Disregarding that, my gut feeling is that, no matter how the variety is supposed to behave, this wine will show a different attitude if you open a bottle, say once a year. (Oct. 7, 2011)
Eldad Levy and Iggy Aloni's Austrian catalog. 129 NIS.
So, being in such a GruVe mood, I took another one for the team.
F. X. Pichler, Loibner Berg, Gruner Veltliner Smaragd, 2007
This is in a wildly different vein. Initially, there is not a trace of minerals, on neither nose nor palate; instead, there is a quince and quinine combo that reminds me of Alsace. It feels more alcoholic, despite the difference being of only one degree (12.5 % vs. 13.5%). With air, I get aromas of smoky minerals (think dry steam bath), along with summer fruit on the nose, while the palate becomes fiery on the finish on the one hand, and very textured and multi-dimensional on the other. Unlike the Hirsch, I suspect this will stay in more or less the same place for a few years before evolving.(Oct. 8, 2011)
The Pichler is very much the kind of wine that impresses you for its sheer presence and physicality, while the Hirsch has a more laissez-faire approach. If I prefer the Hirsch - and I certainly can't deny that the word count alone exposes my prejudices - it's not just for any ideological bent, but because it expresses just as much, while imposing less of itself. But do buy both if you can. Just make sure you're self-aware enough to understand your own needs.
Giaconda, 167 NIS.
F.X. Pichler Hirsch