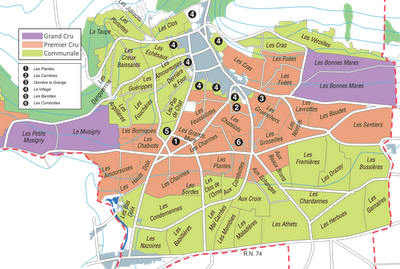 Fredric Magnien, Chambolle-Musigny, Vieilles Vignes, 2007
Sous bois, animalistic, minerally. The nose is nice, yet the palate is a little short. But its ready and tasty and expresses its origins reasonably well.
30-40 euros.
Domaine Bruno Clavelier, Chambolle-Musigny Premier Cru, La Combe d'Orveaux, 1999
Animalistic, almost Gevrey-ish, on the nose, with an added benefit of minerals - the fruit blooms later and plays hide and seek with the minerals. Tannic, still, and a little raspy. More structure than the Magnien and more interesting. But it doesn't give out enough.
40 euros.
Lucien Le Moine, Chambolle-Musigny, Premier Cru, Les Amoureuses, 1999
I admit this gave me a hard time. Terrific nose, really, like a blown up version of the Clavelier, but the palate is also a little more blown up. Just a little too ripe, and, even though the tannins give a savory finish, it's on the order of too little, too late. But I do like it, after a fashion, it's just too uptown for me.
Ghislaine Barthod, Chambolle-Musigny Premier Cru, Les Cras, 2004
Ripe nose, not over the top, with 2004 languid-ness backed by pungent minerals of overturned earth. Pure and transparent on the palate; still young, with sweet fruit at odds with bitter tannins, until the acidity emerges to glue everything into place. One of the highlights of the evening, but, although it's ready, it's some good years before its eventual peak.
80 euros.
Comte Georges de Vogue, Chambolle-Musigny, 2004
Ok, time for the Vogues that Daniel Lifshitz promised. It says Chambolle and it says 2004 and there is aromatic complexity and class. The palate shows the traits of the vintage but not quite so much the faults. That is, its sweet and languid but with no shortness of length and depth, and the nose is most Bourgogne in its soft earthiness.
Burgundy Wine Collection, about 500 NIS.
Comte Georges de Vogue, Chambolle-Musigny, Premier Cru, 2004
Great length and depth, with fine etched tannins. This takes the same path as the village wine, but with more torturous curves and roundabouts, as though the simpler wine was expanded into a multi-volume epic. As its tale unfolds, the 2004 languidness pulls you this way and that, and then the tannins raise their sleek heads to remind you this is, after all, a young vines Musigny.
Burgundy Wine Collection, about 900 NIS.
Comte Georges de Vogue Domaine Bruno Clavelier Fredric Magnien Ghislaine Barthod Lucien Le Moine