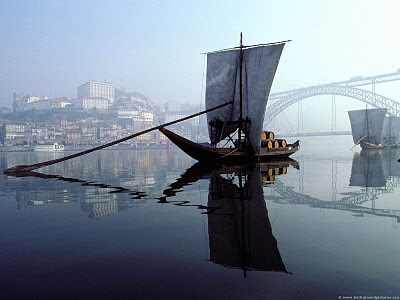 Somewhere, in a wine country far, far away...
Golan Heights Winery is, arguably (no, make that certainly, and hats off to them) Israel's most innovative winery, and it has been introducing new grape varieties almost from the very start. After kicking off with Sauvignon Blanc and Cabernet Sauvignon, they introduced, in dazzling succession: Merlot, Chardonnay, Riesling, Gewurztraminer, Pinot Noir, Sangiovese, Syrah, Viognier and Nebbiolo. Not to mention their bubblies and single-vineyard bottlings. And the Katzrin. And the Rom. In short, they displayed a hunger for expansion and quality, an almost insatiable need to fill every niche in the food chain. Which may have been driven by a business plan, but it was always, persistently, actively, there. Being kosher never hurt - a keeper of kashrut could conceivably fill his fridge solely with GHW offerings and still have representation of most major grapes. If he or she also wanted a great variety in style, well, that's a different matter, but I'm sure one could find plenty of interest pursuing the differences between the vineyards and matching the Katzrin against the Rom.
If one can sense a critical tone here, it's because I object to the winery having become a supermarket of wine, catering to every possible need and sometimes coming off as a "me, too" contender. Although, to be quite fair, they've avoided coming out with a varietal Carignan or Cabrnet Franc when they became all the rage, because head winemaker Victor Schonenfeld thought the varieties were not up to the GHW standard (on the other hand, I'm not sure what high standards the early editions of the Pinot Noir and Viognier adhered to).
And now the 2T, a dry blend of Touriga Nacional and Tinta Cao, two Portugese grapes hardly grown outside the Duoro as far as I know (although I suspect someone in California or Australia has planted them, and someone will one day find some obscure, genetic relative in Bulgaria or something). Whatever possessed the wine-making team to make this or the marketing heads to think there might be a niche for it, I can't deny it's an interesting choice and indeed even had me coughing up the shekels for it. And no, I didn't get a freebie from the winery; after over four years, 2GrandCru is still off the radar screen, but I've whined enough about it on the box on the right, so let's just move on to the wine.
It's different, I'll give it that, but, although I could go at length about its evolution in glass from sweet and formless to sweet with soft, yet meaty, tannins - and just what that may imply about its cellaring potential - the final picture is this: it just doesn't feel - to me - that much different than the picture other varieties paint under the GHW idiom. Not knowing a lot about these grapes, I feel the wine teaches me more about GHW than about the grapes. You could make an argument that it teaches something about Israeli wines as well, except that I don't like the message it preaches and it's not spectacularly new; anyway we've been making flattering, ripe wines for over a decade and it drove me nuts years ago. So, I'll pass, especially since a recent tasting has shown me local alternatives I find more exciting and palatable.
So, to refresh myself, once dinner and wine were over, I opened a cider from Normandy. Domaine Dupont, Cidre Reserve, 2008. It's utterly delicious, to me, and stimulating. It's got a rubbery, funky stink and taste to it that my wife immediately detested, even as it instantly smote me, but it speaks to me of very frank attachment to its place of origin. Let's put it this way: Dupont may have introduced a few tweaks to the technique, but basically the Normandians have been making this sort of stuff for centuries; GHW have been making wine for only three decades and the 2T is their first attempt at Portugese varieties. Guess which wine seems fresher and more original?
Shana Tova!
Domaine Louis Dupont Golan Heights Winery