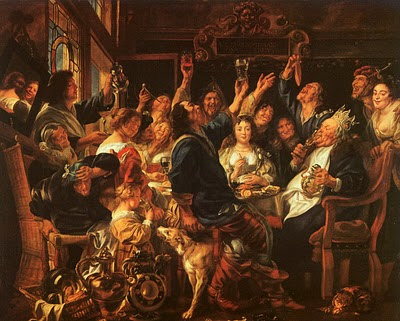 A.K.A, Ran Shapira's 42nd birthday.
Gimmonet, Special Club, 1999
Classic brioche nose, lovely apple fruit on the palate. Tasty, flavorsome, balanced and long. The mineral aftertaste proves once again the uniqueness of the genre and why the contents of a bottle of a great Champagne like this can vanish almost instantly.
Eldad Levi, about 380 NIS.
Vincent Girardin, Puligny-Montrachet Premier Cru, La Folatieres, 2004
A complex, well-deep nose, with an exquisitely lovely Bourgogne "stink" that blends rotting flowers and flint. The palate is reserved and I'm very pleased with the present stage in its evolution, as I've stopped gambling with white Bourgognes, so each (relatively) early drinker serves as corroborative evidence. Unfortunately, the next wine proves that sometimes you have to go out on a limb.
WineRoute, price unknown.
Bonneau du Martray, Corton-Charlemagne, 2004
Extremely closed, Lord have mercy, despite having been opened four hours before dinner. Even when we returned to it after the two wines which followed, progress was miniscule. There's an echo of minerals and a hint of fruit, and both whisper of what one day will emerge out of its time vault.
Burgundy Wine Collection, about 650 NIS.
Bouchard, Corton-Charlemagne, 2004
Much more open. On the nose, a gentle overlay of flinty minerals, with delicately sweet fruit, more gentle than the Folatieres, making it classier - even when the flint expands, it just doesn't need to shout as loudly. A very tasty palate, as well. I guess age would flesh it out even more, but it is very inviting now.
WineRoute, about 700 NIS.
Paul Pernot, Bienbenues-Batard-Montrachet, 1999
The mineral backdrop is a little wider, a little deeper, than the Bouchard, although I can't honestly say that it's a quantum leap, but enough for a solid win. It wins by refinement, see, which is always hard to gauge.
Not imported to Israel, price unknown.
Meo-Camuzet, Vosne-Romanee Premier Cru, Les Chaumes, 2002
A lovely animalistic-cum-minerally nose, with red fruit bordering on black. The palate more than flirts with sweet ripeness and needs more cellar time to get rid of its baby fat and tighten its grip. An hour in glass (which was in addition to three hours of lowered shoulders) serves that purpose as well, lending it complexity even as a slight hole in the middle is demurely revealed.
Tomer Gal, 650 NIS.
Henri Perrot-Minot, Mazoyeres-Chambertin, 1999
A step up. Stinkier, darker, better structured. Savory, tasty, almost leathery tannins resolve into a tantalyzing hint of minerals. Rustically charming and a (surprising, to me, because I've never heard of the producer) winner.
Not imported to Israel, price unknown.
Jean Grivot, Echezaux, 1999
Elusive refinement and complexity. Here again we have a mineral attitude complexified by a sweaty stink, which is made more mysterious by notes of violet. There's a nervy streak of spices on both nose and palate that gives it an edgy presence. Love it.
Burgundy Wine Collection sells recent vintages for about 800 NIS.
Meo-Camuzet, Clos de Vogeot, 1999
A deeper nose, in a way, than the Grivot, but somewhat less complex. Very fruity. Ah, then a minerally streak enters and adds interest. Complexity and class in surprisingly plaid trappings - this aristocrat is a little bored.
Burgundy Wine Collection sells recent vintages for about 850 NIS.
Guiraud, Sauternes, 1999
Marmalade and toffee, not enough botrytis. Alcoholic and simply not luscious enough. An example of why I've stopped buying Sauternes a few years back.
Price unknown.
Bonneau du Martray Bouchard Guiraud Henri Perrot-Minot Jean Grivot Meo-Camuzet Paul Pernot Pierre Gimonnet Vincent Girardin

Joel said…
As for the Bouchard--perhaps the only one there theoretically within my reach (perhaps for a birthday), I see that many people were worried about premox on Cellartracker, http://www.cellartracker.com/wine.asp?iWine=121388

While it gets a great score, ranging from 92-95 points, which is really generous for those guys, it seems that people are really paranoid about premox.

Indeed, you've had a couple of bouts with premox, but it seems to be on the downward trend from 2004 onward based on my very limited knowledge.

Do you have any way to predict this problem? It seems like White Burgs have a problematic reputation for being either too closed or subject to occasional premox, and finding that window of opportunity becomes a gamble--as you've noted in the past.

2GrandCru said…
There's no way of predicting premox except following other people's notes. I had the Jobard En La Barre 2004 a couple of months ago and it really drank great, very fresh, one of the best villages I've ever had. The I opened a second bottle this week and it was at the very least lightly oxidized. Drinkable, tasty even, but lacking the freshness that made the first bottle so great.
September 23, 2011 at 11:25 AM