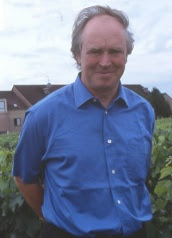 Dude kinda looks like Clint Eastwood
I haven't had much luck with the Brocard Grand Crus, having only tasted off-vintages, over-the-hill bottles, and one 2002 Les Clos that was defunct in ways even a combined attack of TCA, heat damage and bad closure would have had a hard time explaining. Earlier this fall, my other bottle of 2002 Les Clos hinted at what Brocard could actually do, although it still felt like it didn't offer the full power of a Grand Cru.
The bottle of 2004 I'm sipping, however, is the real deal.
The aromatics are excellent and nuanced, with pungent citrus peel, rain water and various marine elements (not just the usual sea-shells but wet beach sand as well), but the best move the Les Clos makes is on the palate. This isn't bigger than other Chablis I've drunk, just more precise in its presentation of Chablis - you can almost chew the fossilized Kimmeridgian limestone in its stoney, iodine-inflected finish. A light bitterness in no way imposes on the powerful, detailed texture, and the wine comes off as very balanced and tasty. Grand indeed, you betcha!
This set me back about 50 USD five years ago.
Brocard

Joel said…
This post makes me real thirsty, and not for water.

Btw, Grabbed a bottle of the 08 Vougeraie Cote de Beaune Les Pierres Blanches from Tomer yesterday. Interested to hear if you've tried it...

Uh, I was planning to schedule this post for next week but entered the wrong date. I tried to change the date but I think your comment sort of 'cemented' the date. Oh well.
April 15, 2011 at 12:51 PM