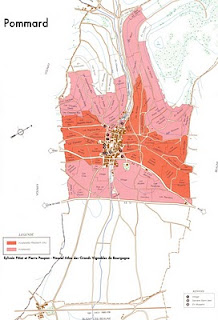 Honestly, sadly, I don't quite have the experience to pontificate on the virtues and characteristics of Pommard. I can say that I don't find the Pommards that Tomer Gal's Burgundy Wine Collection imports to be rustic, crude or over-masculine. I do find them to be very minerally, angular at times and not inexpensive. The quality was impressive on this night - but then, the producers tasted are arguably (or not) the cream of the crop.
All the bottles were opened on the morning of the tasting.
We started off with an aperitif.
Deux-Montilles, Pernard-Vergelesses Premier Cru, Sous Fretille, 2007
I do love Alix' whites, but this is too young for me to read (plus it was tasted during the 'cocktail' part of the event, to which I was late, as usual, and thus could not dwell on it for too long), but it shows Bourgogne classicism and elegance. Very nice and I need to re-visit. 200 NIS.
Chateau de Puligny-Montrachet, Pommard, 2007
I know why I don't like the Chateau's whites, since Etinner makes them, not Alix, and he just doesn't have a feel for whites, I guess. But it's odd that I never get excited by their reds, since I adore what he does at the family's domaine. It's almost as though the red grapes are embarrassed to be fermented and raised in Puligny... This villages does come close to catching my attention, but ultimately, I move on. It has sour cherries, herbs, iron, blood - good stuff. But, although the palate is long and tannic, the fruit is backwards enough right now to make the package seem imbalanced. It might improve in time but it doesn't captivate the way the wines that follow do, even in their youth. 190 NIS.
Dugat-Py, Pommard, Levriere, 2007
Expensive, old-vines villages - the concept that Madame Bize-Leroy perfected and which we'll meet in a couple of paragraphs. The nose is closed, yet dense, meaty and intoxicating despite its reserve, developing an intriguing overlay of flint and iron. The palate is sleek and long and I love the structure, which climaxes in a complex finish that is the personification of minerality. 570 NIS.
Dugat-Py, Pommard, Levriere, 2006
This wine was moved to a decanter two and a half hours prior to the tasting, which makes comparisons with the 2006 challenging. The nose is riper, almost liquorish, eventually showing minerals. The palate is riper as well, fatter too, the structure is more accessible, yet less interesting. Tomer thinks it's the better wine (yet charges less for it) - I find it more hedonistic, and if it has more tannins than the 2007, then they seem to interact in a looser, more chaotic manner with the fruit, which might be due to the decanting, I don't know. 530 NIS.
Domaine Leroy, Pommard, Vignots, 2005
It's Leroy, it's 2005, so naturally it's closed, albeit very deep. I could have phoned in the tasting note. Except that after eluding us all as it slowly and miserly released some red fruit, it suddenly oozed mint, of all things. Who'd have thunk? My friend Rani Osnat kept half a glassful for half an hour and found it shut down even more. That's 'cause it's Leroy and it's 2005! 1300 NIS - yeah, that's 'cause it's Leroy.
Comte Armand, Pommard Premier Cru, Clos des Epeneaux, 2007
This is the wine commonly viewed as the benchmark Pommard. And it quite deserves it. The nose is mineral-laden, the palate tannic and structured and both show lots of iron. It's like a blend of the Dugat-Py's and the Leroy, with an extra dimension of elegance - and yes, it is elegant, despite all that iron. 440 NIS.
Montille, Pommard Premier Cru, Grands Epenots, 2007
From first pour and until almost the final sniff and sip, it totally looks, smells and tastes like strawberry juice, with just a strand of minerals. Very high grade juice, mind you. Even though it's soft and fruity, it is just as hard to approach as the previous wines, because it is so monolithic, in its soft fashion. Confoundingly morose and introverted, in a very feminine way. 380 NIS.
Montille, Pommard Premier Cru, Rugiens, 2007
Another fruity start - perhaps raspberry this time, then showing, once again, minerals and also, for a change, exotic spices that are reminiscent of the Cote de Nuits. Ripe and hedonistic, and although it explodes on the palate, it is one of the most elegant wines of the night, the yummiest for sure. 520 NIS.
Montille, Pommard Premier Cru, Rugiens, 2006
I loved this wine when I tasted it last year and I still do. The nose immediately attacks with flowers and red fruit. And, yeah, minerals. The palate is structured and finishes off with smooth tannins. 480 NIS.
Montille, Pommard Premier Cru, Rugiens, 2003
This was an odd experience. Tomer holds this wine in high regard and even though he spotted some TCA, he still served it, since he didn't have another bottle of the 2003. The logic behind his unconventional approach was that a good wine can sometimes makes some headway against TCA, enough to at least give a glimpse of the wine's potential. He served a backup as well, to be fair. I will say that the wine felt off, but didn't really smell of wet cardboard, as I'd expect from a corked wine, and did not show any over-ripeness, as I would have expected from a 2003. So I guess it really was a damn fine wine to begin with.
Comte Armand, Pommard Premier Cru, Clos des Epeneaux, 2002
Damn, what a terrific nose, cheesy and stinky, then returning to the night's theme of minerals and more minerals. The palate is ripe, not overdone, but enough to detract at this point of the wine's life cycle, even though it does not blur the sense of underlying balance and tannic bite. A really, really fine wine.
Montille, Pommard Premier Cru, Rugiens, 2005
Awesome potential. Vibrant fruit, a little blood, lots of minerals and animalistic nuances. A magical finish to a lovely night and a mini-Rugiens vertical.
Chateau du Puligny-Montrachet Comte Armand Deux Montilles Domaine Leroy Dugat-Py Etienne de Montille