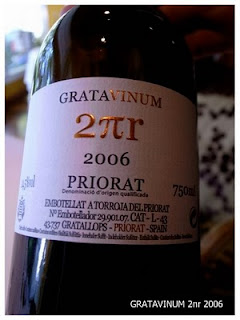 The Scottish Company has recently* started importing wines from three small wineries from Spain, owned by the Cusine family. The Pares Balta winery from Penedes dates from 1790 and owns the other two: Dominio Romano from Ribera Del Duero (founded in 2004) and Grata Vinum from Priorat (founded in 2001). They sounded fairly modern to me from the notes published by local writers, yet Spain is just about the only wine country where I can countenance modern trappings and so I thought I'd give the new-comers a try and check out the lower-end wines.
Dominio Romano, Ribera Del Duero, RD, 2006
Modern in style, this is a powerful, if not concentrated, wine with ripe tannins that are balanced by the fruity acidity you'd expect from Tempranillo. Elsewhere, it's not easy to find any obvious signs of Spain or Tempranillo. The nose doesn't really belong anywhere in particular (I'd have guessed Australia blind) even as it reveals black cherries and chocolate with spicy, meaty, even saline, overtones. While I prefer a rawer style from the warm lands, I like this wine; despite the lack of typicity, it is a good wine and its fruitiness will make it a crowd-pleaser, while its inherent balance will also ensure that the more discerning wine lovers will also find interest in it. (Jan. 9, 2010)
About 150 NIS
Grata Vinum, Priorat, 2πR, 2006
The problem most detractors of modern Priorat have with the style is, I think, a single minded monolithism. This is not the case here, thankfully; while this wine here is not exactly my cuppa, it is a nice distraction from my usual routine, and, not being the winery's flagship wine, extreme tendencies are rather reined in (unless I'm biased in assuming a modern flagship wine necessarily goes overboard with certain things like fruit extraction). The nose is ripe, not over-extracted, the fruit on the borderline between black and red, with subtly smoky/minerally notes. The palate has a grainy mouthfeel which contrasts with the ripeness of the fruit, and, while the acidity is nothing to write home about, it does leave an impression on the finish and somehow there is enough structure to anchor the languid, hedonistic personality. Coming in, I was biased to prefer the Ribera but this turned out to be my favorite and believe me it was a pleasant surprise. I'd buy again and drink over the next five years. (Jan. 16, 2010).
Read about the winery here.
About 160 NIS.
* "Recently" my foot. I'm so out of touch, I seem to pick up on these things a few months after the fact.
Dominio Romano Grata Vinum