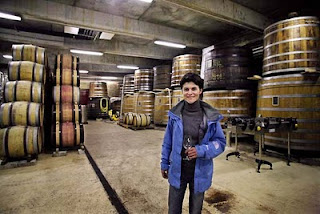 About four years ago, a bottle of the 2004 vintage from this minor village was my first encounter with the wine-making skills of Alix de Montille. Greater experience allows me to better place the 2006 version in the Burgundy hierarchy and spot its faults, but luckily enough I can still enjoy it for what it is. Basically, what we have here is good juice from a limited terroir subjected to careful craft. Applied to a better climat, these same hands produce wines I would term inspired, so I guess there's only so much you can do, unless you're willing to torture your vines a la Madame Lalou Bize.
Whatever, let's talk about the wine. When God was designing white Burgundy, he probably started out with an initial draft, an alpha pilot in software terms. This pilot version had green apples and an overlay of sulphurous minerality on the nose. Likely, the Lord Of Hosts also tossed a few flowery notes in shorthand. The palate was not too fruity, God was more into secondary flavors, but he made sure it had a mineral cut and a saline finish. Like many such first attempts, it was half-baked. Thus, the fruit was on the lean side, and a little bitterness remained, yet the wine remained refreshing.
A blind man would see where I'm going with this. Yes, in my opinion, this Saint Roman could well have been God's little offhand sketch of Bourgogne. It's a fine introduction, and it's a pleasant and pleasing wine even after you've gone through your Premier Crus, your Les Clos, your Corton-Charlemagnes and your Montrachets.
Another Burgundy Wine Collection import, this costs 170 NIS. Which is expensive for what it is, especially as the Villaine whites are a little better and cheaper. Also, the Deux Montilles Rully, which seems to get better scores, is also cheaper, and Rully is not an intrinsically finer AOC. Having said all that, I would buy a bottle of this every vintage.
Deux Montilles

Anonymous said…
This comment has been removed by a blog administrator.
December 21, 2009 at 5:46 PM