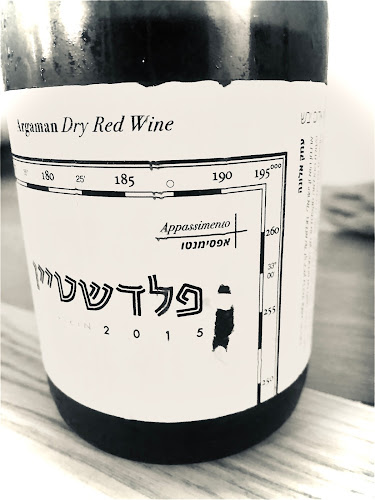 Argaman. It's a local story. It's arguable whether it's a local success story. There have been wonderful wines made from it but it hasn't really caught on. Let's just call it a work in progress.

It's a local crossing of Souzão and Carignan, designed specifically for good color, which had been a problem at the time (70's-80's). It's the kind of workhorse, role-player grape that usually doesn't make a name for itself. When Avi Feldstein was head winemaker at Barkan's Segal subsidiary, he thought it deserved more and manages to make a very good varietal wine out of it. He has recently returned to the grape in his own label, and so has Barkan/Segal, in the Barkan Beta series. That's where we pick up the story. In the meanwhile, the Jezreel winery has also been making an Argaman varietal.

It's a light, fruity wine, with a short finish. It's forte is freshness and a lovely character that makes me thing of black cherries roasted in a marinade of pepper and thyme. It may not be a shockingly deep, complex wine, but it certainly has few parallels or peers.

There's a winemaking tweak here: half the grapes that comprise this wine were dried in the winery, appassimento style. The intention was to concentrate the flavors, which is something Avi could have managed with a longer hang time in the vineyard, but there were some aspects in that approach he wanted to avoid. I would say the winemaking and the additional bottle age have reinforced the character of the grape (the earthy, spicy black cherries) and lent the wine greater depth, heft and complexity. It's very good and deserves to produced every year.