Enivate is the latest name from Eldad Levy, who at this point is importing to Israel more Tenerife producers per capita than any wine importer in the world! He partners with Uri Caftory foe the Tenerife mini-arm of his business, but even divided by two, their numbers lead the pack by a lap.
Envínate is a wine-making and consulting venture headed by Alfonso Torrente, José Ángel Martínez, Laura Ramos and Roberto Santana, who met while studying winemaking at the University of Alicante. They don't have their own site, but you can read about them on various importer and merchant sites: here, for example, or you can read Eldad's Hebrew version.
Eldad brought in two whites and a red from Tenerife and two reds from the mainland. The mainland reds are pretty, lithe-bodied creatures that aim for pure joy and pleasure and are so balanced the greatest fatigue they present is uncorking the bottle.
Castilla-La Mancha, Albahra, 2018
This is a blend of Garnacha Tintorera (better known as Alicante Bouschet) and the indigenous obscure grape Moravia Agria from a single vineyard at 800 meters elevation in the Almansa region, at the southeastern tip of Castilla-La Mancha. It's a smoke and mineral tinged red with hints of flowers, its fruit mostly on the red end of the spectrum, the palate silky and moreish. Its personality, as it comes across in its aromas and flavors, is quite idiosyncratic. I could try and list the descriptors, but they wouldn't convey its foreignness. The great fun about coming across a new wine region is when the character of the wines transport you to a new land.
Ribeira Sacra, Lousas, Viño de Aldea, 2018
This is "village level" wine, if you will, from various plots from the Amandi, Ribeiras do Sil and Bibei sub zones. It's close to 95% Mencía, a very trendy red grape, the rest are more obscure varieties none of us have ever heard of. Mencía is another in a long line of "new" Pinot Noirs, but this is actually, to me, more like a cross between Syrah and Gamay: smoky, peppery, flowery. It's not very complex or deep, but it's very expressive and it's acidity makes it very drinkable. In fact, it's probably the most enjoyable Mencia I've ever drunk.
Before moving on to the rest of the Envínate wines in the portfolio, I'll make a detour at another Mencía-based wine, from another terrific new wave winemaker - one that, like the Envínate quartet, aims for nimble wines that are quick on their feet. Eldad has been carrying Veronica Ortega for a couple of years and she's popular enough with his clientele for the allocation to dry up fast. 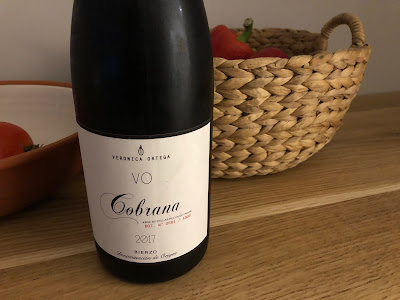 Verónica Ortega, Bierzo, Cobrana, 2017
This is a field blend, 85% Mencía and the rest indigenous white grapes. Like the reds above, the fruit is red-tinted and silky on the palate, with a smoky/pepper character on the nose. I know I just wrote that the Lousas is "probably the most enjoyable Mencía I've ever drunk" but I wrote that before I revisited the Cobrana and now that I have, it's not easy to choose the Lousas over the Cobrana or vice versa. Both are lithe wines that don't swath their way through the palate with a machete but rather astutely attack it with sharp daggers. The Lousas is the more assertive, but the Cobrana has the upper hand for being more expressive and pretty, both aromatically and palate-wise.
Benje, Blanco, 2018
On to Tenerife then. This comes from the Ycoden-Daute-Isora appellation and is made of Listan Blanco grapes from ungrafted vines in volcanic soil. It combines the zippy, zesty acidity of a cool climate wine with the briny character of old Riojas: olives and salty cashews. 25% of the grapes see skin contact, but my gut feeling is that the contact serves to highlight the grape's saline personality rather than subverting the varietal character. Like the rest of these wines, it will transport you to an exotic land. You might not sleep well in the accommodations once you arrive, but you'll enjoy the scenery.
Taganan, Blanco, 2018
This is the kind of old school white Spain is (in)famous for: salty, funky, nutty, briny - made to accompany tapas in a steamy, stuffy bar. It's a "love it or hate it" proposition, although I personally never really hate it; it beats Gewurztraminer. It works when flor and high alcohol give it a boost in Jerez. Classic Rioja houses like Heredia can do wonders raising wines for ages in barrels to produce a similar effect. The Tenerife wines initially hit me hard with their funk, but I've been cooling off. The Benje works because of its zesty acidity, but the Taganan is fatter and flabbier and I have a hard time warming up to it. Anyway, the cuvee is made of a multitude of grapes. Among the grapes identified by science are Listan Blanco, Albillo Criollo, Marmajuelo, Gual, and Malvasia. I doubt even the Master of Wine program would test you on that, but every article on Envínate lists them, so this must be important.
Migan, 2018
This comes from two old parcels of Listran Negro. It's spicy and funky - not bretty - with vibrant acidity, but it really doesn't have the verve, depth or complexity of the Mencía based wines. Kudos to the nose, which is exotic enough to entertain for a glass or two, but this is really a wine that sounds more exciting than it tastes.
So far, mainland Spain is way ahead with a win-lose ratio of 3:0, versus 1:2 for Tenerife. Victory is clinched with an excellent showing of a favorite white of mine, by the wonderful Veronica.
Verónica Ortega, Bierzo, CAL, 2017
Another trendy grape, Godello, one that truly deserves its newfound glory. This is a salty wine with a long, focused, savory finish. But this flavor set is backed up by clear fruit and vibrant acidity, so you get a wine that is more alive than the Tenerife whites. I'll even go so far as to say it's more alive than most people you will ever meet.
Envínate