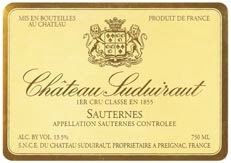 Almost from the very start of my love affair with the world of wine, dessert wines, especially those made with the more or less incidental help of botrytis, attracted me both intellectually and sensually. Intellectually because they occupy a different niche in the social life of wine drinkers, in the same way the dessert is a course apart from the main meal; because of the wide array of wine making techniques involved; and because of the (theoretically) long aging curve.

Seven, eight years ago, I thought Sauternes rocked. The first encounters with the funky, slightly pungent,  mustard-like aromas were a revelation, while the effect on the taste buds evoked visions of Victorian lords sipping their after dinner drinks with butter biscuits, or whatever they snacked on while smoking their Cubans and maintaining the Empire.

I started having doubts when I tasted the 2003's. The acidity was on the low side, but I bought a few anyway, as the vintage was so highly praised that I figured I was inexperienced and should make some conservative purchases. While waiting for my bottles to mature, I did enjoy the 2001 Sauternes and made very enjoyable forays into (in chronological order): sweet Sherries, Ausleses and eisweins, Tokays and the Loire. The eisweins and Tokays were especially memorable, and, due to their racy acidity, epiphanies and standard raisers.

When I finally started delving into my stash of 2003 Sauternes, I noticed the low acidity no longer bothered me as much as before. The high alcohol was the new deal breaker. I really prefer a lighter drink on my tired palate after a meal. People tell me that a wine can be balanced at 14% ABV. I'd like to know what balances the alcohol. A greater extraction of fruit? Someone needs to put some serious thought into why that would be a, ahem, palatable solution to the problem.

Anyway, the bottom line is my dessert wine after this year's Shavuot dinner is likely to be the last Sauternes I will buy, although there's always a chance I'll take a dip into less heralded vintages in the hope they will produce daintier products.

Suduiraut is on the short list of d'Yquem runner-ups, and despite all my reservations above, this bottle proves why. The nose is a an immensely proportioned dollop of toffee double dipped in molasses and nougat, glowing in the botrytis funk I described in the start of my diatribe, and is actually a good example of wild excess finding its own inner logic. Life doesn't offer a lot of comparable olfactory experiences at anywhere near affordable prices. The palate, as expected, isn't very demure. The muscular slabs of fruit and sugar manage to obscure the alcoholic heat until almost the end of each sip, and trade off finesse and nuance for intensity. I can understand why 2003 was lauded so, it's just not for me. But I already said that. Enjoy, if you have any. (May 14, 2013)

WineRoute, this probably cost about 180 NIS for a half bottle in 2005 or so.
Suduiraut