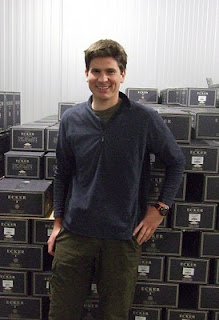 Bernhard Ecker
I drink a lot of wines at home, and sometimes my wife actually pays attention and gulps down a wine with gusto, signifying it's a wine to live with, as opposed to yon wine geek simply peering up his butthole to contemplate the contents of his goblet.

And sometimes I try to court her with something special. Which she deserves. Sometimes she actually lets me.

Some really special evenings are a mixture of both.

On this Saturday night, Efrat stir-fried some zucchini, cabbage, onions and fennel. I expounded by sprinkling cumin and paprika. The end result seemed to call for Gruner.

I'd like to think the minerals and white pepper on the nose, plus the roundness of the palate, would have had me peg this as a GruVe in a blind tasting. In a non-blind setting, it sure feels typical. Whatever, it strikes such a savory balance of acidity, salinity and juicy sweetness of fresh apricots that I have this ear-marked as a new house white - it's almost too easy to drink, while an exotic flair on the nose makes things even more interesting and exciting. (Dec. 17, 2011)

I believe Eldad Levi and Eigy Alony are calling their Austrian import boutique Wine Domains Of Austria - however they call themselves,they sell this for 119 NIS.

For the second act, I suggested a dessert bottle for two.

Presumably, if I read the label correctly, the Loosen staff picked BA-level grapes from all over their vineyard holdings. Thus, this is supposedly a bargain-basement beerenauslese. Now, Efrat complained about this being cloying and I can certainly see her POV, as I've had livelier dessert wines, but to my palate, the balance is good, albeit not outstanding, enough to make this yummy while avoiding any distractions. The nose oozes so much clementine and apricot toffee that it overwhelms a strand of botrytis funk that just hangs there all on its lonesome, waiting to be invited to the party. The palate is, well, as hedonistic as hell. I love it when dessert wines stick a tongue of juicy acidity up my canals, and if this wench doesn't quite live up to that, at least it smothers me with affection. Thus, just very good, not great.

BdCh said…
levi & Cohen ?
this what happens when you drink too much TBA....

Ecker is a real steal,
but always a pleasure to read you.

I fixed my typos in the original post - and no, I have no idea who is the Iggy Cohen I was thinking of.