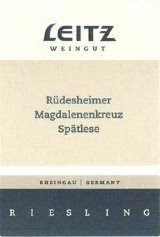 My wife's tasting note was a succint yelp, "what a delicious wine!" which sums it up very well. My somewhat longer note follows. The nose is lovely, very fruity with mineral accents: white fruits and apple pie, chalk morphing into slate, flowers on the verge of rotting. The palate is very harmonic now, the sweetness of the fruit so well balanced by the citrus-like acidty, they wrap around each other like acrobatic lovers. Very straightforward, it doesn't deal in great complexity and offers an intense attack before stopping somwhat short. Delicious, like the missus said, and I'd drink it over the next five-seven years. Maybe more. It's so complete right now it's hard to tell but it seems to me it won't go into any dumb phase in the future. (Oct. 1, 2008)

Sold for about 100 NIS by Giaconda. Excellent value.

Tasting this mystery wine blind, I guessed was a Pinot Blanc from Alsace. There was a sort of spicy-honeyed sensation on both nose and palate that seemed Alsatian yet the wine was too round, despite being obviously dry, to be a Pinot Gris. There was something vaguely Burgundian about it, though, but I have to admit that was more obvious once the bottle was unveiled. I just can't ignore the fact that my senses will pick up certain things once I'm fully aware of the wine's origin. So label me a mediocre taster if you will, but if you have a chance, listen to this wine instead. The nose is very much Bourgogne-like, no matter what caused me to pick up those characteristics. It wiggles and changes and runs through a whole gamut of Burgundy signatures: nuts and honey, then white meat and flint. And all throughout, it displays a certain spiciness that does recall Alsace and not really Germany. Am I saying it's an internationally-styled Chardonnay? Well, it doesn't go for the usual tactics of such wines (I'm thinking Planeta or Katzrin, for instance). It feels oak-aged without any overt signs of oak and boasts a certain saline minerality, as well as a different mouthfeel than other Chardonnay I've drunk, a different shape of roundess, never tasting sweet or cloying. So even if I couldn't pick out its locale, it feels as though it belonged to a specific point of origin. And it tastes real good.

Listed by Giaconda for 185 NIS, it is just about sold out.

Though this is a blend of Semillon, Sauvignon Blanc and Gris (50%, 40% and 10% respectively), it smells and tastes an awful lot like a Chablis on the initial pour: lemon and lime laced with chalk and flint. Johnson and Robinson's Atlas Of Wine refers to their wines as "understated, oak-aged dry whites" which is right on the button at first, as, three years post-vintage, the oak is noticeable but not too offensive and the wine is restrained and elegant. Then, after an hour or so, the oak becomes too prominent and a trace of rusticity flares up, though overall it's still a good drop. I think the elegance will reassert itself in a couple of years but currently, the overall package yearns for a rest. (Oct. 4, 2008)

Sold by Giaconda for 117 NIS (seemingly a magical number for them as a lot of their "value" wines are listed for the exact same price).

A classic nose that you immediatley recognise as Alsace even if you don't immediately pick the variety: a melange of ripe pears and apricots over alot of pepper and hints of smoke. The palate is lush with a spike of bitterness on the finish, which I sometimes like and sometimes don't; here I like it as it balances the ripe, sweet notes. Lately, I haven't personally found Pinor Gris very balanced on the palate yet this one is, even if at times it seems it struggles. But the struggle lends it character. (Oct. 14, 2008).

Robert Weil, Rheingau, Riesling Spatlese, 2007
Very tight, the nose showing ripe apples and pears with sweet dough and spices and hints of flint underneath. A very interesting nose though I would expect more elegance from a Rheingau even at this early stage, I think. The palate is considerably drier, showing some faint sweetness on the palate only after a lot of coaxing. A good wine but not especially striking right now and only somewhat weightier than a kabinett. The terroirist in me is inclined to blame its indifferent character on the lack of site specifity but it might be just its extreme youth. Either way, I was underwhelmed, I must admit. (Oct. 15, 2008)
Not imported to Israel. Our host bought it in Hamburg for about 30 euros. For my part, I contributed the following and probably got the longer end of the stick:
Tommasi, Amarone, 2000
Probably the last Amarone I will ever own. Leather, spices and chocolate overshadowing the fruit on the nose. Raisney sweetness counterpointed by bitter notes. In short, very typical and for my taste, as good as Amarone can get, for higher-level stuff would be too much for me. Impresive, though probably somewhat meek for Amarone afficiandos. (Oct. 15, 2008)
I bought this from WineRoute for 220 NIS about four years ago.
Peter Jakob Kuhn, Rheingau, "Quartzit", Riesling QBA, Trocken, 2005
This is supposedly a de-classified higher predikat. Judging by the 13% alcohol, I would guess a Spatlese. It does show a refined and complex nose although there something harsh about it on the palate. The aromatic profile is predominately grapefruit-y at first, then opens to show herbal notes, chalk and flint, and the grapefruit is overtaken by peaches and apple pie. Very crisp and structured, quite long and dry without inhibiting the fruit on the attack and mid-palate, although the finish is austere and not very elegant, despite its length. The fruit holds up to the alcohol but acidity is submerged, which explains the de-classification, I guess. (Oct. 19, 2008)
Purchased two years ago from Giaconda for 189 NIS.
Muga, Rioja, Reserva, 2001
Tasted blind with friends almost a year ago, we all thought it was a modern Spanish and indeed, even now at home, there something about it that at first points at Ribera del Duero, something in its fruity forwardness and sweetish overtones. The nose is quite lovely - though not as distinctive or complex as a mature, old school Gran Reserva and the oak is too obvious on it to boot - with sweet red fruit enshrouded by scorched earth and herbs. The palate if anything is even better, balancing power and elegance, sweet fruit counterpointed by rusty tannins and a long, saline finish. I opened it because a man's gotta drink and this is surely ready, but this could easily have been cellared for five more years. And it would be a great idea because right now it's still struggling to contain the oak. (Oct. 21, 2008)
Imported by IWS, I've seen recent vintages selling for about 120 NIS
Chateau du Seuil Leitz Marc Tempe Muga Peter Jakob Kuhn Rebholz Robert Weil Tommasi