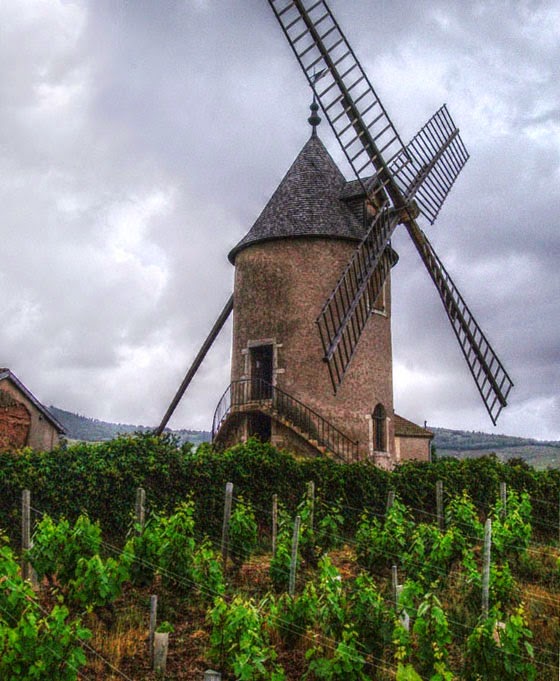 I wrote a post about George Descombes when I brought a batch over from Paris. I posted when Wine Route started importing Georges Dubeouf to Israel and I'm especially proud of my piece about the Beaujolais Cru portion of the Tomer Gal portfolio.

Now I write about the Giaconda foray into the fiefdom of the Gamay grape, a.k.a. the hunting ground for excellent, interesting, well priced wines.

Even in a perfect world where Beaujolais Cru is a household word, I expect most consumers would gyrate towards the better known AOCs: Morgon, Moulin A Vent, Fleurie, Brouilly even. Regnie would register a "what the?" reaction. I've only had one before, Charly Thevenet's rendition, which is great. This is a different animal. This an earthy, herbal affair with fresh red fruit, quite tasty, with initially timid tannins that grow more forceful. It's akin to a pretty, lower tier Cote d'Or red, with a plumper, yet rougher build, and without much of the airy, heady intoxication that even a lowly Bourgogne from a good producer often provides. (Dec. 1, 2014)

So the Pignard is nice, but with the following producer, Giaconda picked out a pair of winners!

This, of course, is from the more widely known Morgon (which probably accounts for 80% of all Beaujolais Cru imported to Israel). Not only that, it's from the more highly regarded Cute du Py sub-appellation. The sensual appeal is more immediate and intense, as the wine quickly registers that earthy, juicy impact created by a very good Gamay wine. It's meaty smelling, too - like a good Nuits-St.-Georges - the tannins meatier as well, compared to the Pignard, and savory and saline. On the other hand, the fruit is languid, so it's both meaty and languid. And very, very good, on par with Foillard and Thevenet, the kind of wine that builds up in glass, strips, teases, unfolds and seduces. (Dec. 4, 2014)

This is more reticent than the Morgon, although its relative silence is not enough to hide its qualities. It's arguably finer and more floral, while still projecting the same fresh, languid core of fruit, as well as fetching salinity. The Potel-Aviron Beaujolais Crus are both in need of time, but while the Morgon could use a year or two to gain more refinement and clarity, for the Moulin A Vent it would be time well spent in fleshing out the details and nuances.  (Dec. 5, 2014)

Well, that was fun. Thank you, Giaconda.

Now, some observations about Beaujolais Cru in general.

One. It's easy, if not tempting, to call Gamay a country cousin of Pinot Noir. But it's not that the wine are much less refined, so much as different: it's like God took a Cote d'Or cru halfway between village and premier and grilled it as opposed to slow cooking it.

Two. The local imports are of such high quality (and we're still not getting any Clos de la Roilette, Guy Breton or Jacky Janodet, so there's still room for improvement) that I'm just about  in tears. Along with the local Loire reds, someone like me finally has ample choices for house wines.

urgent loan offer said…
We offer a wide range of financial services which includes: Business Planning, Commercial and Development Finance, Properties and Mortgages,Debt Consolidation Loans, Business Loans, Private loans,car loans, hotel loans, student loans, personal loans Home Refinancing Loans with low interest rate at 3% per annul for individuals, companies and corporate bodies. Get the best for your family and own your dream home as well with our General Loan scheme. Interested applicants should Contact us via email: (creditloan11@gmail.com)
December 1, 2018 at 6:36 AM